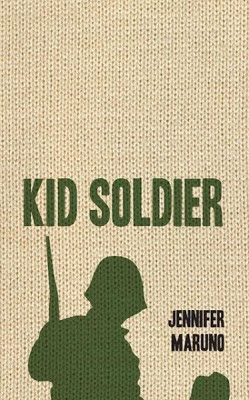 It all begins with a bicycle in a store window.  Richard Fuller, 15, decides that is what he wants but knowing his laundress mother could never afford to buy it for him, he is determined to earn the money himself.

Richard begins with a job picking fruit and generally helping out an elderly farmer, than moves on to delivering bread with Mr. Black, the baker in Niagara Falls, Ontario.  Both men take Richard under their wing, so to speak, but it is Mr. Black who initiates Richard into the life of a soldier.   Mr. Black invites Richard to the opening ceremonies at a Canadian Army Summer Camp where he is the cook.   Later, knowing that Richard is underage, Mr. Black uses his influence to get Richard into the camp under the name of someone who couldn't make it.

It turns out that Richard is quite good at signaling and enjoys his two weeks of playing soldier, taking much of what is thrown at him in stride, and not being terribly bothered that the other men, who smoke, drink and gamble. are older than he is.

Not long after he returns home, Canada finds itself at war with Germany and Richard, still under the influence of Mr. Black, decides to enlist, but under his own name not the assumed name of summer army camp.  And because he is a known face at the enlistment office, Richard manages to enlist using just his library card.  Unfortunately, his actions lead to an estrangement with his mother.

Eventually, Richard is shipped overseas, but that first year of war was a quiet one, earning the name the phony war.  But again, Richard takes it all in his stride, and excels at what he does.  Though he misses his mother, his spirits are buoyed by the support he gets from Mr. and Mrs. Black and from Amy, his next store neighbor who provides a humours  bit to the novel.  Amy keeps knitting socks for Richard, but they always seem to get lost along the way.  She finally comes up with a great plan for definitely getting the next pair of socks to him - it is such a good plan, even Richard is afraid to open the package.

But eventually the phony war ends and the Blitzkrieg begins and the reality of war really hits very close to home for Richard.

In her Author's Note, Maruno explains that many of the episodes and incidents she includes in Kid Soldier were based on details gotten from her father's diary, which give the novel a very tangible sense of historical reality.  Her father, like Richard, also participated in the army's summer camp under the same name as Richard - Chester Lee Huston.  It is hard to believe that a 15 year old boy could get away with enlisting, but it did happen, even in WWII.

I found Kid Soldier to be an interesting novel.  The fact that a boy as young as 15 could be accepted into the army so easily is a very scary thought, but the idea of child soldiers always is and is something that still occurs in some parts of the world.  This was also an especially interesting novel because it was about a Canadian boy's experience of the war and books about that aren't as numerous as American or British books, even though the Canadians fought just as hard and suffered so many causalities.

The novel is well-written with well defined characters.  Written in the third person, the voice of the narrator is engaging, and the character of Richard is very likable, making this an very readable novel.

This book is recommended for readers age 13+
This book was an E-ARC from Netgalley.com
Posted by Alex at 9:44 AM

Email ThisBlogThis!Share to TwitterShare to FacebookShare to Pinterest
Labels: Canada, Coming of Age, Soldiers, YA