The Poppy Lady: Moina Belle Michael and her Tribute to Veterans by Barbara Elizabeth Walsh 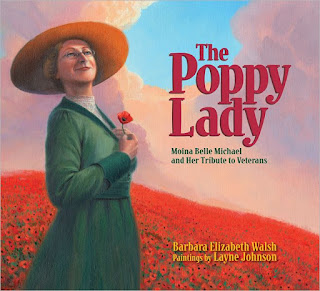 Once again, it will soon be Veteran's Day in the US and Remembrance Day in many other countries around the world.  This is a day we set aside to honor, remember, and reflect on those persons who are serving and have served their country during armed conflicts and is often referred to as Poppy Day, thanks to the efforts of Moina Belle Michael A/K/A The Poppy Lady.

Now Barbara Elizabeth Walsh has written a book detailing how Moina earned her nickname.  Walsh begins with a brief introductory prologue describing Moina's life up to World War I.  Moina was a well-educated girl from Good Hope, Georgia who began teaching the children of neighbors in 1885 in an old slave cabin at the age of 15.  By the time World War I broke out, she was a university professor at the University of Georgia.

The rest of The Poppy Lady is a narrowly focused narrative about Moina's attempt to do something meaningful for the soldiers who fought in the Great War.  It begins Moina's story with the start of the war, while she was traveling through Europe.  Still disturbed by what she had seen of the fighting after she returned home, Moina was determined to do something for the soldiers after the US entered the war in 1917.  Like many women on the home front, Moina knitted warm items, rolling bandages, collected books and magazines and even invited soldiers home for a meal, but she continued to feel she could do more.

So off she went to New York and set up a welcoming place in Hamilton Hall, Columbia University, where soldiers could come and relax, talk and get information.  But even though it was a hugh success, but Moina wanted to do still more.

One day she read the poem "We Shall Not Sleep" by Lieutenant Colonel John McCrae, a Canadian doctor, which honors the soldiers fallen on the battlefields of Flanders, Belgium.  Moved and inspired, Moina began wearing and giving out poppies as a tribute to those soldiers.  Other began to follow her example and eventually the poppy was adopted around the world as a symbol of honor and remembrance for the fallen members of the armed services.

What a wonderful introductory biographical account of Moina Belle Michael's work during and after World War I Barbara Elizabeth Walsh has written about this not well known lady who did so much.
Layne Johnson's lavishly detailed oil on canvas painting do much to capture Moina's spirit.  Just look at the exuberant expression on her face on the cover of The Poppy Lady or in the image below: 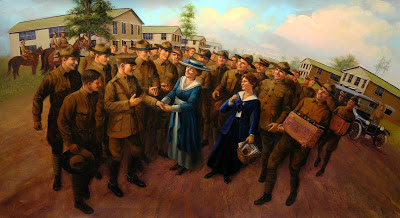 A picture books illustrations do so much in furthering the telling of a story and that is certainly true here.  Together with Walsh easily accessible text, Moina's determination simply shines through, making The Poppy Lady a truly inspirational book for young readers that shows how one person can make a big difference.

This book is recommended for readers age 7-10.
This book was sent by the publisher.

To learn more about the poppy and Moina Belle Michael be sure to visit The Great War 1914-1918
You can find out more about author Barbara Elizabeth Walsh here.
Be sure to visit artist Layne Johnson to see more of his work from The Poppy Lady

This week's Non-Fiction Monday round-up is hosted by Booktalking