From the Archives #24: Snow Treasure by Marie McSwigan, illustrated by Mary A. Reardon 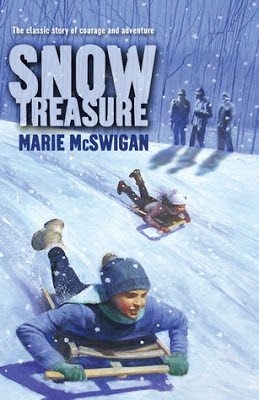 One day they weren't there and the next day, Norway was swarming with Nazis, even up by the cold, cold Arctic Circle in the little town of Riswyk, where winter lasts for most of the year.  But just before their arrival;, Peter Lundstrom, 12 almost 13, knows that something is up among the adults in Riswyk.

His father, a banker, and Uncle Victor, a fisherman, and other townsmen have devised a plan to get Norway's gold out of the country and to America so that it never falls into the hands of the Nazis.  And, Peter learns, it involves not only him, his younger sister Lovisa and friends Helga Thomsen and Michael Berg, but all of Riswyk's children age 10 and up.

The plan is that every child would take four bars of gold on their sleds 12 miles to where Uncle Victor's camouflaged boat is at anchor in the nearby Fjourd.  They would bury the gold in the snow and build a snowman over their gold bars.  The townsmen figured no one would question sledding children.  After burying their gold, the children would head over to a nearby farm where they would be given dinner and a place to sleep.  And during the night, Uncle Victor would come and fetch the gold with his first mate, Rolls.

And the plan works - though not as quickly as they had planned.  The weight of the gold bars is too much for the younger kids and they are forced to take less than planned each time.  So the whole operation stretched out to six weeks instead of three.  And of course, this gives the Nazis time to cause problems.

For one, even though the schoolteacher ls serving in the Norwegian army, the Nazi commandant decides the children should return to school.  A noticed is posted, but before school even resumes, a mysterious illness breaks out among the younger children.  The doctor manages to convince the commandant that the 'epidemic' is highly contagious and could easily spread to his men and that he advised the children not infected to stay outdoors as much as possible.

But one day, Helga tells Peter she has heard noises and felt like she was being watched for the last few days.  Worried, Peter and his mother find Uncle Victor's boat and warn him about this Nazi spy.  Sure enough, while building their snowman army over the gold shortly the next day, the Nazi soldier shows up.  Luckily, Uncle Victor and Rolls were right there and capture the soldier, taking him to the hidden boat.

The soldier tells them that his name is Jan Lasek and he is from Poland, but was taken by the Nazis when they invaded his country because he can speak many languages.  He was forced into a Nazi uniform, but really just wants to go with Uncle Victor to America.

But the next day, the Nazis are out looking for him and when the children refuse to answer any of their questions, the commandant gets angry and is just about to discover Lovisa's buried gold when Peter hits him in the ear with a snowball.  Taken into Nazi custody and locked in a cell, Peter decides saving the gold was worth anything the Nazis can do to him.

Will Peter be able to escape the Nazis before they take any action against him?  Or was moving all that gold in vain?

Snow Treasure was written in 1942, after Marie McSwigan read a newspaper article about Norway's gold being smuggled out of the country.  In her Forward, she describes what she believed to be true about the children who delivered the gold on their sleds to a waiting ship.  However, over time this story has been questioned and it seems there is no proof that it is true.  And so at the end of the book, an additional note is included to that effect.

I really wanted to like this story as much as I did the first time I read it, but now, reading it as an adult with more knowledge of WWII, the story was too slow moving and felt almost too naive for today's reader.  I also thought that the writing sounded dated and it made the story of moving millions of dollars in Norwegian currency on sleds for six weeks past the Nazis not not feel very dangerous or really exciting, the more so because I didn't really connect with any of the  characters.


It is a story of courage and wits and grim determination, and though the most tragic aspects of the invasion have no place in it, it makes plain to readers of 9 to 12 the treachery and arrogance with which the enemies of three-quarters of the world are trying to stamp out freedom.

Snow Treasure is richly illustrated with a number of black and white illustrations by Mary A. Reardon in what appears to be either pencil or charcoal.  This wasn't one of the best books I have read about Norway in WWII, and while I still like the idea of the story, I just don't like the actual story as enthusiastically as I used to.  However, this is one of those novels that designed to show children that no matter what they can make a difference and for that reason, I think it is worth reading.  And it is an excellent example of how a community can come together to achieve a goal.

A useful Teacher's Guide is available for Snow Treasure here