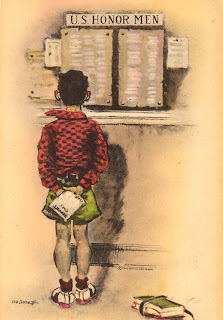 My brother is buried in Calverton National Cemetery in Suffolk County, NY.  He was eligible to be buried there because he has fought honorably in one of this country's war (not WWII).  He didn't die on the battlefield, but he did die because of what happened there.  And tradition has it that every year, the scout troops from all over Suffolk County gather on Memorial Day weekend to decorate the graves of all the members of the Armed Forces who are buried there.  Decorate? Well,  Memorial Day used to be called Decoration Day, a day to clean up the grave of a loved one and decorate it with flowers, plants and flags.  Many people still do this.  And that is just what the scouts do in Calverton and national cemeteries across the country.  At each grave, they place an American flag to honor each and every soldier.  It pleases me no end that they do this and it would have pleased my brother since he was such a traditionalist.

Another tradition in the Armed Forces is the setting of the White Table, sometimes called the Remembrance Table, in mess halls and homes all throughout the US.  What is a White Table? 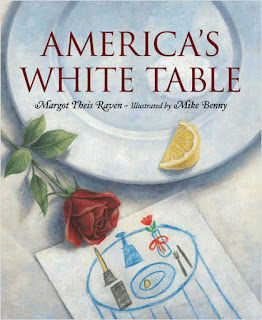 In her book, America's White Table, Margot Theis Raven explains what it is through the experience of three young sisters who are given the privilege of setting a small, solitary white table in their home in anticipation of their Uncle John's visit.  As they set the table, their mother explains to them the symbolism of each item on it.  And then she tells them the story of their Uncle John's service in Vietnam.  He was held captive by the Viet Cong with three other men.  When the chance to escape came along one day, one of the men, named Mike, was too sick to go and while two escaped, Uncle John stayed behind with Mike.

Later, however, another chance to escape came and this time Uncle John carried Mike on this back into the Vietnam jungles to away a rescue helicopter.  Unfortunately, Mike died before it arrived.

And so, the White Table is set in honor of Mike, and of all the fallen, all the POWs, all MIAs.

America's White Table is a lovely book that never fails to bring tears to my eyes.  It cover a very difficult subject with so much delicacy.  The Author's Note at the end gives a history of the White Table tradition which began with the Vietnam War, but now extends to all wars.  And although the focus is on Veteran's Day, when we honor those living members of the Armed Services, like Uncle John, it is also a highly recommended for Memorial Day, when we honor those who are no longer with us.

America's White Table is illustrated by Mike Benny.  This is his first children's book, and he has certainly captured the spirit of this touching story.  The soft, full color illustrations, though realistic, have an almost ethereal feeling to them that seems so perfect for this story. 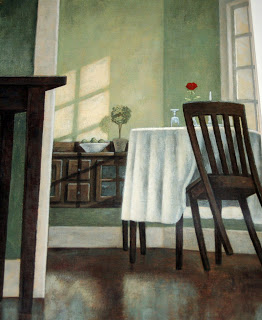 This is one of those picture books being published by Sleeping Bear Press that is really meant for readers a little older than the traditional picture book age range, but is a group of books I have really come to like for their relatively unknown, but interesting topics and I find I recommend them often.


And so I hope that during this weekend, as you are enjoying your BBQs, picnics, day at the beach, in the park or the backyard of friends and family, and of course, at all the big the Memorial Day sales, you will take a moment to think of and thank those who served your country.

I know I will!

The Armed Forces History Museum has more information on the history, setting and symbolism of the White Table.