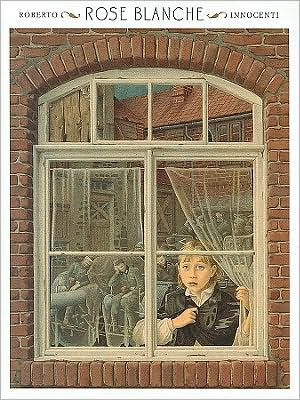 I have had Rose Blanche sitting on my bookshelves for years, but I have avoided writing about it for the same reason The Boy in the Striped Pajamas hasn't shown up here - they are both problematic texts with good intentions.

Rose Blanche is a picture book about a young girl living in a small town in Germany.  One day, some trucks with soldiers [Nazis] show up and take over the town.  Then, some people are rounded up and put on trucks that drive them away.  Rose, curious about these truckloads of people, decides to follow them.  She follows the trucks out of town and through fields and forests until she comes upon some buildings surrounded by pointy [barbed] wire and where there are lots of children just standing around.  They tell Rose that they are very hungry.

Rose keeps returning, bringing the children whatever food  she could sneak away from home for them to eat.  One night, the soldiers silently flee the area, followed by the townspeople also running away because other [allied] soldiers are on their way to the town.  Not knowing what is happening, Rose takes her food and returns to where the children are, but the place is empty and despite the dense fog, she can see that the children are gone.  While she is standing there, there is a single gunshot.  Rose is never seen again.

I found two real problems with Rose Blanche.  The first was that right in the middle of the first person narration by Rose, the narrating voice switches to the third person.  Why?  Even given her eventual fate, this just didn't need to happen and it was jarring.  I think using a third person narrator would have been better from the start anyway, given the freedom an omniscient narrator has over a first person. 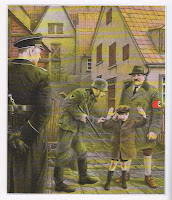 Second problem - Rose's story is just not historical reality.  Her actions just couldn't, wouldn't happen.  It is just not feasible to think that Rose could get away with following, finding, and bringing food to the children in the concentration camp.  Nazi soldiers were simply not that unobservant.  And why doesn't her mother notice the missing food at a time when food was so very scarce?

Roberto Innocenti lived through the war in Italy and because he was afraid and given no explanations about what was happening, he decided to do Rose Blanche as an introduction to the Holocaust for children, in the hope that it would lead to a helpful, informative dialogue between children and adults.  To foster that dialogue, there are no explanations of what is happening, only Rose's very concrete descriptions of what she sees.  And what she see can be found in the very detailed illustrations that accompany the sparse text.  In that respect, it is a perfect example of how a child, like Innocenti himself, might view the world around them sometimes lots of things happening but not enough experience to understand it all. 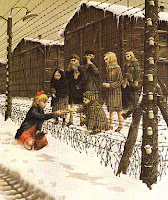 And so it is left to the adult reading with the child to fill in the explanations - who are the soldiers? who are the children? why are they taken away?  etc.  Which makes this a good classroom/homeschool book for introducing the Holocaust to school-age children.  But this also makes Rose Blanche a story that should not willy-nilly be given to a child to read on their own, it is way too graphic for younger picture book readers.

I really wanted to love Rose Blanche, but in the end, I could only like it.  This being said, this is not a book to just disregard.  There is much to be gotten from it.  A tremendous amount of discussion inducing material can be found Innocenti's wonderfully detailed, claustrophobic illustrations when used in conjunction with hard facts about the Holocaust.  And given that Rose Blanche is named for the German resistance movement die Weisse Rose, any discussion could naturally include ideas about the resistance and the fate of the young people in it.