I was telling a friend of my about a 1941 ad I found in which Ocean Spray had offered a red plastic turkey shaped cranberry cutter that could be gotten with only a label and a dime.  She started laughing heartily.  Her grandmother had apparently sent in the required label and dime, and had received her cranberry cutter.  Many years later, the cutter had been passed on to her mother and it became my friend's job every Thanksgiving to cut out the cranberry turkeys - year after year.

Back in 1941, it must have seemed like kind of a fun, festive addition to the traditional Thanksgiving table.  No one suspected that in a very short time America would be drawn into the war that was already being fought in most of the world after being attacked.

With the country had been at war for a while and things were scarce.  In 1942, the Macy's Thanksgiving Day parade was cancelled for the first time.  Turkeys and all the trimmings were scarce and places at the table left empty by family members serving their country were filled with other members of the armed services invited to share a home-cooked Thanksgiving dinner.  But while tables at home may not had had the kind of abundance they had in previous years,    overseas the troops did have a full Thanksgiving dinner, no matter where they were.  And with women off working in factories and munitions plants, often there was no one home to make the dinner. 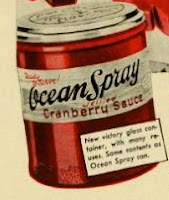 Amazingly, despite shortages, the cranberry turkey cutter was offered again in 1943, but this time with a difference.  Metal was needed for the war effort, so the familiar cranberry can was replaced with a glass jar, but not just any glass jar.  By now, Ocean Spray, like every other company in the US,  had caught Victory fever and so its new glass jar was a victory glass jar, with the same cranberry contents as before, but also with many reuses.

But with things getting scarcer and scarcer amazingly enough, cranberries were still available, but now at a much higher price than the year before.  And, of course, with war plants again staying open on Thanksgiving, many woman many women were either working or just didn't have the time or energy to make a Thanksgiving dinner.

By 1944, the food that make up a traditional Thanksgiving dinner were really
in short supply, with cranberries being the scarcest.

But, in1945 Americans were celebrating their first peaceful Thanksgiving and the cranberries were abundant, the turkeys were plump and the Macy's Thanksgiving Day parade was back.

Nevertheless, some nice cranberry recipes were still being offered to cooks during the war.  I found this one in a 1943 article about Thanksgiving dinner in New York Times and I am planning on trying it this year.

Combine the sugar, water, spices, lemon juice and rind, and boil together
for five minutes.  Add the cranberries and cook slowly, without stirring, till
all the skins pop open.  Chill thoroughly before serving.
(Makes one quart)

During the war, the Red Cross did a lot to help not just servicemen and women, but also refugee children and their families, those left homeless from bombings and prisoners of war.  Thanksgiving 2012 will be a difficult time for so many who lost everything in Hurricane Sandy.  While you are giving thanks for your blessings, please remember those who are not so fortunate at the moment.  If you feel like you want to help, you can text REDCROSS at 90999 to make a $10.00 donation to the American Red Cross Disaster Relief.


And I hope everyone has a happy, cranberry-filled Thanksgiving.