Far from My Home, Never to Return: a Polish Child's WWII Memoir by Nadia Bogdaniec Seluga 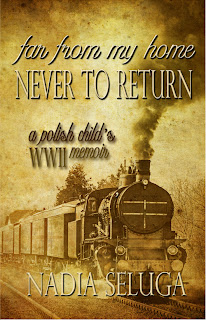 There are not as books written about the arrest and deportation of people living in the Eastern Europe that Stalin’s Soviet Union invaded in 1940, but what is available are excellent tellings of the cruelty so many innocent people suffered in Siberian labor camps.  Added to that body of work that includes the fictional Between Shades of Gray and Esther Hauzig’s memoir The Endless Steppe is another true account - Far From My Home, Never to Return: a Polish Child’s WWII Memoir by Nadia Seluga.

Born Nadia Bogdaniec in Lunin, Poland, she was only 8 years old when her home town was bombed and later invaded by Soviet soldiers,  It wasn’t long before the soldiers arrived at her home and arrested her family in the middle of the night.  Loaded into cattle cars with some many other Polish families, they were sent to a labor camp in Siberia.

Life was harsh in Siberia.  No one was adequately clothed to endure the bitter cold Siberian winter.  There was very little to eat, and if a day of work or school was missed, there was nothing to eat that day.  The conditions were unsanitary, and bedbugs, lice and illness was prevalent.  But the Bogdaniec family managed to stay together, and survive.

Then, suddenly in 1941, it was announced that all Polish prisoners had been granted amnesty, when the Soviet Union was forced to join the Allied powers in order to defeat Hitler.  But amnesty didn’t mean freedom to return home.  The family was forced to stay in Siberia for a while longer.  Unlike so many others who had to remain in Siberia, the Bogdaniec family was lucky enough to eventually be put on a train and sent southward on a journey that would take them from Siberia to Uzbekistan, Krasnovodsk, across the Caspian Sea to Pahlevi, Iran.  From Pahlevi to Teheran, then Karachi, India (now Pakistan), until [they] stopped at the northern part of Lake Victoria (Uganda, Africa) where they remained until 1948.

Seluga discusses her wartime experience openly and honestly, and a good bit of poignancy.   Yet, Seluga never falls into any kind of self-pity or resentment.  Perhaps because the Bogdaniec’s were among those fortunate enough to survive with the family intact.  And it wasn’t easy.  WW II was a time when so many families were ripped apart, and death was a constant companion, fueled by Illness, starvation, inclement weather conditions, inadequate housing and heating.

Far From Home, Never to Return is told in a series of memories and flashbacks, but in a loose linear way.   As a reader, I felt that I was sitting in Seluga’s living room while she described her life to me, in other words there is a very intimate feeling to the narrative.  Throughout the book, there are photos of Nadia as a child, along with her sisters, brothers and parents, so that by the end I felt I really knew the Bogdaniec family.

If you are interested in the stories about those who were sent to Siberian labor camps, this is a book not to be missed.
This book is recommended for readers age 14+
This book was sent to me by the author’s grandson, Jacob Seluga.