World War II: On the Home Front by Martin Gitlin 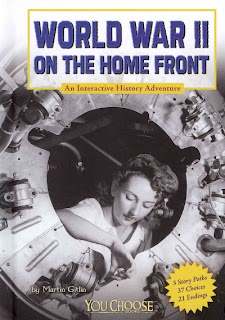 World War II: On the Home Front is described as an Interactive History Adventure.  It begins with an explanatory chapter giving a brief introduction about how and why World War II began for the United States.  Then the reader is supposed to choose a story path to follow.

There are three path choices: a woman living in New York City, with one child and a husband who is serving in the Armed Forces overseas; a 12 year old boy living in San Diego; or a wounded African American veteran from the segregated south.  At the end of each chapter, the reader can make more choices and as the story progresses can more fully experience what it might have really be like for either the woman, the boy or the soldier.

Depending on which path the reader chooses, there is a possible 7 endings for each one.  Everything depends on the choices made, yet in the end the reader comes away with a pretty good overview of what life on the American home front in World War II.

Sound complicated?  I thought so, too, and yet when I sat down to read this book, I found it really quite interesting and novel and not hard to figure out.  I liked the interactive element of the book, found the pictures and posters were appropriate to what was being experienced in the chapter where they appear and I liked going back and exploring a new and different path for each character.  History and concepts were explained clearly and concisely, and there is also a timeline a glossary, suggestions for further reading, and a well done index, making it a well-rounded book.

I also really liked that the author makes suggestions for paths that the readers can do themselves: explore life as a German or Italian American, as a man declared 4F or the famous people who entertained the troops.  The war affected people differently and this books helps make that clear.  The interactive element is furthered by suggesting that kids create paths for these or other additional experiences.

World War II: On the Home Front is perfect book for homeschooling or classroom use when studying the war.

This book is recommended for readers age 9-12.
This book was purchased for my personal library.