The Girls They Left Behind by Bernice Thurman Hunter 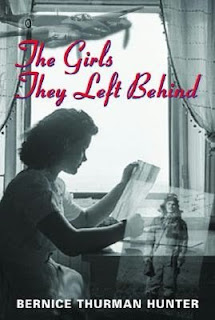 This is a novel that was recommended to me by my Goodreads friend Emily.  And I am so glad she did.  Thanks, Emily.
The Girls They Left Behind opens in June 1943 in Toronto, Canada.  Beryl Brigham, 16, had decided two things: to get a summer job and to change her name to Natalie.  But first she must attend her best friends wedding.  Eloise is marrying her high school sweetheart just before he ships out to the war in Europe.   In fact, all the boys are enlisting and shipping out, and it seems like the girls spend all their time at Union Station saying goodbye to friends and family.
After working the summer in a department store and dissatisfied that all she can do for the war effort is buy War Saving Stamps, Natalie decides not to finish her last year of school and takes a job at the local factory making machine guns.  Now 17, Natalie applies for and gets a job there, much to her parents unhappiness.  Later, she gets a job with the help of an old high school friend at De Havilland Aircraft making bombers.
So things are too bad for Natalie.  She is making good money, able to save and help out at home, has a job and friends, and feels she is finally doing something important for the war effort.  Things are good until war suddenly becomes real.
First, her on again, off again boy friend turns 18 and enlists.  Then her favorite cousin and best friend Carmen writes to her through his English girlfriend to avoid the censors and although Natalie received more news from him than is allowed, she nevertheless feels very jealous of Carmen’s girlfriend Joan who sends the letters.  When Carmen is recruited to be a gunner with a squadron called the Dambusters (because they blow up enemy dams), Natalie is told not to tell his mother.  But when he is reported missing in action, the family is devastated by the news. Yet, Natalie still resents his girlfriend when Joan reaches out to her.
At first annoyed that all the boys were going away just as she reached the age where she could have fun, Natalie must deal with some very grown up issues, especially as more and more familiar names start to appear on the missing or dead list.
The Girls They Left Behind is a coming of age story told in part through diary entries and in part through first person narration.  Natalie is a bit immature at the beginning, but as she learns to deal with responsibility, loss and the other deprivations of war, she must also learn to to know and accept who she really is - hopefully. I thought that the voice of Beryl/Natalie rings true because the story is based on the author’s own experiences in Canada while growing up right down to working in the same department store.
One of the interesting aspects ofThe Girls They Left Behind are the details of wartime Canada the author provides.  For example, a lot of British soldiers were sent to Canada to train and, away from their own families at the holidays, they were invited into the homes of Canadians, just as the Brigham family does.  And there is the leg make-up that Natalie had to use sparingly to make her legs appear to be wearing hose, or the ditty bags she, her mother and aunt made and filled to send to Carmen overseas.
But not everything is about war.  Best friends change, or drift away, old friends pop up and are again important for a while and once more fade in the background, only to resurface later - in other words, the ordinary life of a teenage girl is also played out in this story.  And all of these details help to make this a funny, sad and well-rounded realistic novel.
This book is recommended for readers age 12 and up
This book was borrowed from the Bronx Library Center branch of the NYPL
The American Red Cross has an online museum where, among other interesting things, you can find instructions for making ditty bags, like the ones that Natalie and her mother and aunt made to send to Carmen overseas here.
Posted by Alex Baugh at 7:28 AM

Email ThisBlogThis!Share to TwitterShare to FacebookShare to Pinterest
Labels: Canada, Family, Friendship, YA