The Devil's Arithmetic by Jane Yolen 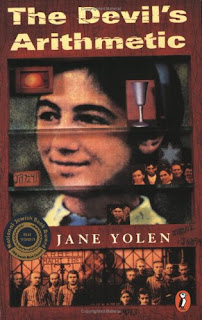 Since tonight is the first night of Passover, I thought I would review a book that is appropriate to the season.  I chose The Devil's Arithmetic because, like the Passover story, it is also about the importance of remembering who you are and where you came from.

Hannah Stern, 12 but almost 13, is a happy girl living in New Rochelle with her parents and little brother, except that she doesn't want to go to her family's Passover Seder.  Bored and apathetic, Hannah is tired of hearing her grandfather's stories about the past, including those about the concentration camp where he spent part of his youth.  But this year's Passover holds a big surprise for Hannah.

When she goes to open the door to let Elijah in, Hannah suddenly finds herself transported back in time to a Polish shetl in 1942, where her name is Chaya Abramowitz and she is living with her Aunt Gitl and Uncle Schmuel.  Hannah learns that Chaya parents have recently died and she has been very sick.  The next day, Chaya goes with her family to another shetl where Uncle Schmuel is to be married.  But before that can happen, the entire residents of both shetls are rounded up by Nazi soldiers and sent on a days long train ride in a cattle car to a concentration/extermination camp.

Before she knows it, the men and women are separated, their clothes are taken away, their hair is shaved off and a number is tattooed on their left arms.  Chaya and Aunt Gitl are assigned to a barracks and give jobs to do.

Working in the kitchen, Chaya meets Rivka, a wise ten year old who has survived life in the camp for a year and knows how to do things to avoid being "chosen" by the camp commandant for "processing."  So far, Chaya, Rivka and their other friends have been lucky, but can their luck hold out?  And will Chaya ever become Hannah again and return to her present day family?

The Devil's Arithmetic is a wonderfully well-written middle grade novel.  The randomness of life for Jews under the Nazis is captured so well, as it the horror their methods, yet not to the point where it is so graphic it would turn kids away from the book or from learning about the Holocaust, but it does help understand at least the how of what happened.

And yes, Hannah does remember what she had learned about the Holocaust in school and home, but little by little she finds her memory fading.  Even her present day family begins to recede from her memory.  And she does try to warn everyone about what happened to Jews in the Holocaust, but they find it so outlandish that they can't comprehend what she says.  And who could blame them?

While Hannah's experiences in the concentration camp point to the importance of remembering, they also demonstrates the perils of forgetting, a good lesson for us all to think about during this holiday season.

Be sure to visit Jane Yolen's website for more on The Devil's Arithmetic, including lesson plans, poems, and an interview with Kirsten Dunst about being in the movie version of the book.