The Endless Steppe: Growing Up in Siberia by Esther Hautzig 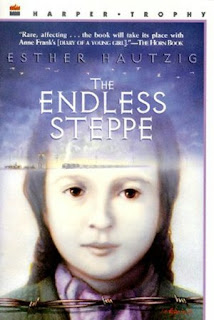 One beautiful June morning in 1941, Esther Rudomin, 10, finds her happy, care free life in Vilna, Poland changed forever.  Early in the morning, her family - father, mother, grandmother and Esther, are arrested by the Soviet Army.  They are charged with being capitalists and sent on a six week long train ride in cattle car ride Siberia.

Arriving at a gypsum mine in Siberia, they are assigned their jobs - father to drive a horse and cart, mother to work at dynamiting the mine, Esther and her grandmother to work in the fields.  The work is back-breaking, the food almost non-existent (mostly watery soup) and the summer heat unbearable in a place as endlessly flat as the Siberian Steppes.

Luckily, by the beginning of fall, the Soviet Union, the exiled Polish government and Britain were allies against the Nazis and amnesty was granted to the Polish deportees.  No longer prisoners, they were allowed to leave the mine and live in the small nearby village.

But life in the village isn’t easy either.  The family moves into the hut of people without much more than they have, and must share a small space with not room to move around it.  But it is better than the mine and Esther is able to attend the village school.  After a series of moves from hut to hut, the Rudomins are eventually able to get their own hut.

But life is still a struggle of obtaining food, having a means of heating the hut during the long, bitter cold winter and the gradual wearing out of the clothing they had brought with them and not money to buy more.  And since so many people are bound together by the cold, the desolateness of the steppe and the struggle to survive, they are often helped by others, just as they help others when they can.   When Esther’s father is forced to serve at the Russian front, the Rudomin women are devastated, but by now quite capable, they managed to find ways of surviving.  And most importantly, they continue to have each other to lean on.

This is a wonderful, very appealing autobiography of Esther’s life from age 10 to 15.  Hautzig has captured her childhood voice beautifully as she recalls her life - the reader meets a very indulged child and watches her become an accomplished, clever survivor.  Yet, Hautzig has also shown herself not always in the best light - there is the bratty Esther, the whinny Esther and the willful Esther - giving a sense that she was indeed a real person, not an unrealistic paragon of courage.

My only problem with The Endless Steppe is that there is no explanation about why the Rudomin’s were arrested by the Soviets for being capitalists, but not the rest of the family, and why they weren’t rounded up by the Nazis because they were Jews.


Short History Lesson:
The answer is simple but maybe not well known.  In 1939, the Nazis and Soviets signed a 10 year non-aggression pact called the Molotov-Ribbentrop Pact.  The pact has a clause that divided Poland - the western part to Germany and the eastern part to the Soviets.  In the summer of 1940, the Soviets began to secure eastern Poland.  But, Hitler being Hitler, he decided to pull a fast one on the Soviets and disregard to pact and invade Russia.  The Rudomins were arrested in that short space of time when eastern Poland was under Soviet control, for being capitalists because they owned a jewelry business.


The Endless Steppe has been in print continuously since it was published in 1968.  It has received the following honors:
1969 National Book Award finalist
1969 American Library Association Notable Book
1970 Jane Addams Book Award
1971 Lewis Carroll Shelf Award

Esther Hautzig led a very interesting life and the School Library Journal ran a fitting obituary when she passed away in 2009 that is well worth reading.

Email ThisBlogThis!Share to TwitterShare to FacebookShare to Pinterest
Labels: Family, Friendship, Siberia, YA