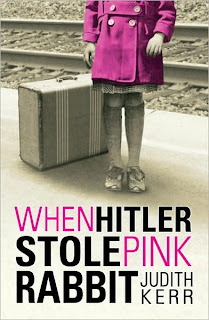 First published in 1971, I have chosen Judith Kerr’s children’s classic When Hitler Stole Pink Rabbit to read for the fourth week of the German Literature Month challenge.  Kerr was born in Berlin in 1923.  Her family chose to flee Germany just before the Nazis came to power because her father, Alfred Kerr, a well-known writer, had openly criticized this regime.  When Hitler Stole Pink Rabbit is Kerr’s autobiographical novel about their flight.
The book begins just before the March 1933 election.  Things are pretty good for Anna, 9, and her older brother, Max.  They do well in school and enjoy playing with their friends.  They are Jewish, but secular Jews.  But one day her father disappears and Anna learns that he has traveled to Prague.  He had been warned that he would be a wanted man by the Nazis depending on what happened in the upcoming election.
A few days before the election, the Reichstag Fire occurs and it is decided that the rest of the family would now travel to Switzerland to meet up with him.  All household goods are packed and put into storage, including all the toys and games that belong to the children.  Their Onkle Julius, who happens to have had a Jewish grandmother, but thinks he is safe and that the Nazis won’t last anyway, is sorry to see them go, but expects the family back with a short time.
The train to Switzerland is a harrowing adventure.  There is always the fear that the passports will be questioned or worse, taken from them, barring entry to Switzerland.  But everything goes well and the family arrives in Zurich and are all reunited.  They soon learn that the Nazis had shown up at their home in Berlin to collect their passports the morning after the election that gave Hitler supreme power in Germany.
The formerly well off family suddenly finds themselves very poor and Anna’s father can find very little work as a writer/journalist.  Despite their neutrality, the Swiss don’t want provoke the Nazis right across the border.  Nevertheless, Anna and her family remain in Switzerland for about a year, living in two small, inexpensive rooms at a Gasthof.  It is very pleasant there; in fact, the only unpleasant incidents are from German visitors who refuse to let their children play with Jews.
It is later decided to move to Paris, in the hope of getting more paid work.  Once again the family find themselves living in a small, inexpensive apartment.  There are many adjustment difficulties, such as Max and Anna are expected to attend school and learn French at the same time.  Food and money are scarce, and everyone is beginning to get on each other’s nerves.  But they make friends with the Fernand family, which gives them some social outlet.  Eventually, the family makes it way to London, where things are expected to work out better for the family.
When Hitler Stole Pink Rabbit is an uncomplicated book, told from the point of view of a child, which Kerr was when she lived through these events.  Yet, if you read between the lines, it is a much more multifaceted story for anyone who knows something about the history of that period of time in Nazi Germany.   And Onkle Julius is typical of many people who believed that things would get better, that heritage didn’t count and by the time they realized the danger they were in, it was too late to leave Germany.


I did feel that Kerr’s depiction of what life is like as a refugee may have been a little too rose-colored, and since I felt that the character of Anna never really grew, so she saw everything rather naively.  The incidents where the family faced some serious danger from the Nazis were well done, but the day to day existence of having no money and being cold, hungry or afraid were really skimmed over.   On the other hand, Kerr is a self-proclaimed optimist and I am not.  Yet, I do feel that this is a book that should be read by both children and adults.
This book is recommended for readers age 9 and up.
This book was purchased for my person library.
This is book 4 of my German Literature Month challenge hosted by Lizzie's Literary Life and Beauty is a Sleeping Cat
When Hitler Stole Pink Rabbit
Judith Kerr
Penguin Group
2009, 1971
192 Pages
Posted by Alex Baugh at 10:26 AM