A Song for Summer by Eva Ibbotson 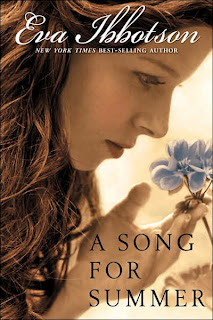 The choice for the third week of the German Literature Month challenge was to pick an Austrian or Swiss writer to read. So I chose A Song for Summer by Eva Ibbotson.  Most people think that Eva Ibbotson is a British novelist and she was.  But she is also an Austrian novelist, and though she left Vienna in the early 1930s because of Hitler and the Nazis, her love for Austria is almost always evident in her novels.


A Song for Summer is no exception.  Londoner Ellen Carr has been raised by her mother and two aunts, all intellectuals and suffragettes, who desired Ellen to follow in their footsteps.  But Ellen’s heart lies outside academics; she is much more attracted to the domestic sciences.  So, after graduating from the Lucy Hatton School of Cookery and Household Management, Ellen takes a job as matron in a rather unconventional boarding school in Halllendorf, Austria.

The school is completely at sixes and sevens, but within a week Ellen has set it to rights.  And because this is an Ibbotson story, all the characters, teachers and students, are extraordinarily eccentric, who succumb to Ellen’s ministrations without sacrificing any of their personality.  And Ellen finds that she herself is attracted to the quiet, mysterious gardener, Marek Tarnowsky.

But Marek, it turns out, had more than one secret.  For one, he is a resistance worker.  He and his friend Professor Steiner drive around in Steiner’s van to various countries rescuing Jews and smuggling them to safety, doing this under the guise of collecting folk songs from these places.  Marek has been searching for another old friend, Isaac Meierwitz, a Jewish music conductor who had been put into a concentration camp and had managed to escape.  When a rescue is finally attempted, it ends in two gunshots.  Each man believes the other has been shot.  Meierwitz wanders for hours looking for Steiner’s van, but ultimately, after days of walking and hiding, he makes his way to the school, finding succor there – Ellen hides him in plain sight by pretending he is her new chef apprentice.
Marek’s other secret is that he is a world famous composer, pursued by an aging, jealous, possessive soprano, Brigitta Seefeld, with whom he had once had an affair.  But Marek has now decided to live in America, causing heartbreak in both Ellen and Brigitta.  If the road to true love is rocky, for Ellen Carr the road is strewn with boulders and Nazis.
Whenever I read an Ibbotson novel I feel as though I have entered not a fantasy world, but a parallel universe.  A Song for Summer is not exactly conventional historical fiction.  Yes, the threat of Nazism hangs over Europe and she acknowledges this repeatedly, but the school in Hallendorf seems to be devoid of any kind of direct Nazi threat, as there was in The Dragonfly Pool, and though there certainly were Austrians who supported Hitler early on, they did not live near Hallendorf.  One would at least expect some representative of the Reich to be throwing his weight around, even though the majority of this novel is played out prior the Austria’s annexation to Nazi Germany (the very short Part II is set during the war and the even shorter Epilogue is in 1945, just after the war’s end.)

I have always enjoyed Ibbotson’s unconventional cast of characters and A Song for Summer doesn’t disappoint on that score.   And I have also always enjoyed the way Ibbotson plays around with opposites in her characters – such as the soul sucking behavior of renowned singer Brigitta Seefeld, the shy, weak Kendrick Frobisher’s pretentiousness, the untalented FitzAllen stealing a Brecht property to gain fame, and the self-important behavior of people who think they are better than others when they clearly are not.  Ibbotson’s portrayal of these characters is totally spot on.

A Song for Summer is a wonderful historical romance novel, something I seldom read, but enjoyed thoroughly.  It was originally written in 1997 and marketed as an adult novel, but was recently reissued as a Young Adult book.  And I believe it is a novel that won’t disappoint adult or YA readers.