The Last Word - and so it goes

This is the last day of Banned Books Week and I hope everyone had a chance to either read a banned book or will in the future.  And I would like to dedicate the following animated clip to the Republic Missouri professor who tried to have Slaughterhouse-Five by Kurt Vonnegut and Twenty Boy Summer by Sarah Ockler removed from the high school's library.  Students can now read these and other challenged books but only if their parents come to the library and checks them out for their teen.
The Joplin Globe wrote in an editorial “Instead of making it harder for books to be removed from library shelves, it will make it easier.”

The Christian Science Monitor stated "At the very least, we’re sure Vonnegut would appreciate the irony. The “Slaughterhouse Five” of the book's title refers to barracks at a Nazi prisoner-of-war camp. Now the book itself will be imprisoned in a “secure section” of school libraries."
Vonnegut certainly would have appreciated the irony.
And so it goes. 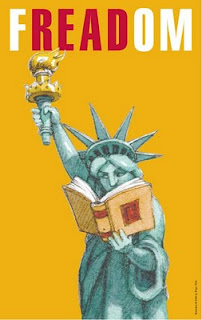