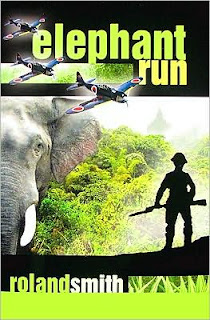 Elephant Run is an exciting action-packed story, set in 1941/2 in Burma (now Myanmar) just as Japan is turning its sites on it for military purposes.

Nick Freestone, 14, has been living with his mother and step dad in London, but now it is 1941, the Blitz is in full swing and one night, the building they are living in is destroyed by a bomb. His parents have become increasingly involved in wartime activities and Nick’s mother decides to send him to Burma, to live on his father’s timber plantation, Hawk’s Nest, and, she believes, in relative safety.

But safety really did prove to be only relative, since there is some tension in Burma because many of the Burmese want their independence from Britain. This sentiment is also shared by some of the mahouts, the men who work and care for the timber elephants on the Freestone plantation. After the Japanese have successfully invaded Rangoon, Burma’s capital, with the help of some of the mahouts, they also take over Hawk’s Nest, turning it into a military center of operations. Nick’s father is arrested and sent to a POW camp; Nick is held prisoner at the plantation and forced to work in what is now the garden of the cruel Colonel Nagayoshi. Nick’s work is supervised by the kinder Captain Sonji, but he is also at the mercy with the pitiless, vengeful Bukong, a former mahout who seems to enjoy beating Nick and others with his cane.

The one person who has real freedom of movement is Hilltop, a Buddhist monk who seems to be able to speak with the elephants and who is said to be over 100 years old. Hilltop knows the Burmese jungles better that anyone and offers Nick his one hope of escaping and rescuing his father.

Elephants are one of my favorite animals and I was very interested in that part of this book. Smith’s mahouts are very kind to their animals and seem to genuinely appreciate what they are capable of doing. One elephant in particular stands out in this book, a character in his own right, a example of the old adage that elephants never forget. Hannibal is a very large elephant who was once savagely attacked by a tiger while tied up. Not longer able to be used as a timber elephant, he roams the jungle. But as the story unfolds, the reader learns the role various people played in Hannibal’s life that demonstrates the truth in that adage.

Elephant Run is an ideal book for anyone who likes a well written, well researched book of historical fiction. It seamlessly incorporates the cultural history of mahouts and their elephants with the factual history of the Japanese invasion of Burma. In this story, the invasion centers on building a fictional airfield at Hawk’s Nest and using POWs, both foreign and Burmese, to build the very real Burma Railroad.  This was an undertaking that resulted in a very high death rate among the workers, a fact Smith continuously points out. Because Nick is not familiar with life on his father’s plantation, Smith uses it as an opportunity to talk about the work of the mahouts, how the elephants are trained and other aspects of plantation life in Burma to inform the reader without straying from the story.  Some might find this pedantic, I found it interesting.

There are excellent curriculum aides for Elephant Run are available at the author’s website.

This is book 4 of my East and SouthEast Asia Challenge hosted by Violet Crush
Posted by Alex Baugh at 9:19 AM