Drawing from Memory by Allen Say 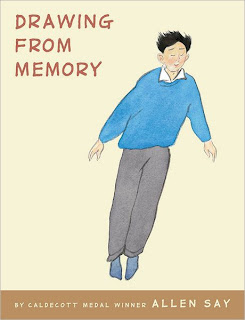 I met Allen Say at a “Meet the Artist” event at the Eric Carle Museum in 2007 when they were running an exhibit of his work called Allen Say: a Sense of Place. It was very nice to meet him, since he is a really charming, friendly person and one of my favorite author/illustrators.

While all of his books stem from his lifetime experiences, Drawing from Memory is Say’s first autobiographical work focused on how he became an artist. Born in Yokohama, Japan in 1937, he was taught by his mother to read at a very young age. Soon he was reading lots of comics and copying the pictures from them. He decided that he wanted to be an artist, and luckily, he had talent, but, unfortunately, not his parents blessing.

But then the war came and his life drastically changed. He and his mother left their home in Yokohama to live in relative safety with a mean uncle. Later, this mean uncle shows up in Once Under a Cherry Blossom Tree (one wonders how many of these kinds of people end up playing a dastardly role in future books.) Say’s father remained in Yokohama.

After the war, however, Say’s parents never got back together. His mother was forced to work financially and Say went to live with his grandmother, who also often and vocally disapproved of his artistic aspirations. But luckily Say got accepted into a school and was allowed to have his own apartment – at 12 years old. There he read about a great cartoonist, Noro Shinpei, and a young boy who had sought this man out and had become his apprentice. Say know at that moment what he needed to do.

Drawing from Memory gives readers an inside look at Allen Say’s development as an artist from childhood on, in both text and drawings. Many of the drawings are done from memory (hence the title of the book) with the exception of one sketch-book he didn’t burn before leaving Japan. The artwork is done in watercolor, pen and ink and various other mediums, all very effectively reflecting the emotions of the artist at the time. The drawings are punctuated with old photos giving credence to the drawings.

The book only covers Says life in Japan, before he came to America. But this was the period of his formation as an artist and was a very important time in his life. I did have a hard time believing he could leave his mentor, Noro Shinpei, with whom he was so happy, even though I know these things need to be done in order for an artist to come into his/her own.

Like all of Allen Say’s works, this is a wonderful book for both kids and adults. Kids, regardless of their future aspirations, if any, will find inspiration in Say’s journey to become an artist in the face of so many obstacles. Adults will learn, as Say’s mother did, to “Let you dear child journey.” (Pg 35)

Though Say doesn’t write much about his life during the war, I found the insider’s picture of post war Japan that he depicts in this book particularly interesting, since it is something we often don’t hear about. The unhappiness and discontent of the people that took place are depicted in the drawings demonstrations and clashes with the police. The people wanted jobs, money to live on, better education, a better government – in general a better world.

Drawing from Memory is a definite must for anyone who likes Allen Say’s previous work and for anyone not familiar with him.

Drawing from Memory
Allen Say
2011
Scholastic
63 Pages
Posted by Alex Baugh at 8:14 AM