The Little Ships: the Heroic Rescue at Dunkirk in World War II by Louise Borden, illustrated by Michael Foreman. 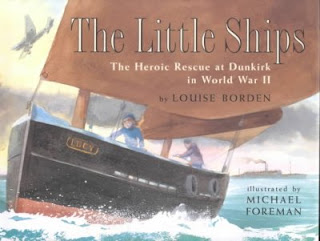 After the Germans did the very thing that no one expected them to do, entering France from the north through Belgium instead of trying to cross the well fortified Maginot Line, they were able to trap British Expeditionary Force (BEF) on beaches of Dunkirk. Operation Dynamo was immediately organized to evacuate the BEF using small fishing and pleasure boats to ferry the soldiers from the beach to larger ships anchored a little further out to sea.

Louise Borden has written a lovely children’s book describing the evacuation from the point of view of a young girl, whose name we never learn, living in a coastal town in southern England called Deal. Her father, Martin Gates, owns a fishing boat named the Lucy and her older brother John is off fighting in somewhere in France.

When the call goes out for people to register their boats for the evacuation, she puts on one of her father’s fishing caps, her brother’s patched old fishing trousers and goes with her father to register for the rescue.

First, the two of them sail the Lucy to Ramsgate, where they join an armada of other small boats. Then, father and daughter head across the English Channel to Dunkirk, pulled by towropes attached to the bigger ships. Arriving in Dunkirk, they ferry boatload after boatload of soldiers from the beach to the ships, always keeping an eye out for her brother John. And even though they ask the soldiers about him, no one can give them any information.

Finally, they are forced to go back to Dover, England because their little boat is running out of fuel. On the way back, the Lucy come under fire by German planes. Their boat is hit a few times by bullets and begins taking on water, so the soldiers must continuously bail out the water with their helmets while father and daughter sail the Lucy home.

When they reach Dover, they continue making inquires about John, but still no one has any information. In the end, they return to Deal with a small black and white dog that had come over with on of the soldiers. The dog is named Smokey Joe, which is the name for a coal-burning minesweeper, the Lucy followed going to Dunkirk.

This is a small, but powerful story of Dunkirk. The anonymous narrator keeps the story focused on the heroes and events she is describing and deflects it from herself, yet it is still a personal story. Her descriptions are an interesting contrast to the beautiful watercolor illustrations done by Michael Foreman, one of my favorite children’s book illustrators. The rescued dog Smoky Joe is a red thread throughout the story. He is first visible in one of the earlier illustrations of the soldiers clutching him while still on the beach just before being rescued. Later, the dog and soldier are depicted being pulled out of the water and onto the safety of the Lucy. And again, the last picture of the narrator, still on the Lucy and holding the dog. The dog is a symbol of success and hope and even though they never find information regarding the whereabouts of John Gates, the dog represents the hope that he will come home too. 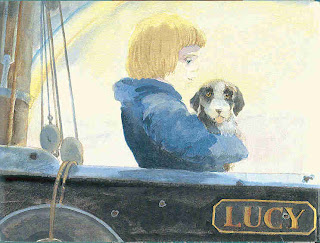 There is an Author’s Note at the back of the book that is very interesting. It gives some of the facts and figures regarding the evacuation of Dunkirk, for example number of small ships that participated and number of rescued soldiers. It also provides an excerpt from Winston Churchill’s speech to Parliament about the evacuation, reminding people (then and now) that while the rescue was indeed a miracle, it was not a victory.

This is an excellent book for introducing the topic of Dunkirk to younger kids but is also a good teaching tool for older kids who may already know something about World War II. The rescue at Dunkirk is a well known story and this book does try to add anything to that.  It is basically a straightforward narrative.  It has none of the exciting events found in stories about Dunkirk for older kids.  There is enough realism in it, but not so much that it would be too gory or scary.I read this to my 8 year old niece and it sparked lots of questions about the war, but in all fairness, it is a subject she does know something about from reading about Molly in the American Girl books.

This probably doesn't really need a spoiler alert, but I have added one anyway, just in case.
This book is recommended for readers age 8-12.
This book was borrowed from the Webster Branch of the NYPL.
Posted by Alex Baugh at 10:59 AM