From the Archives #6: Worrals of the W.A.A.F by Captain W. E. Johns 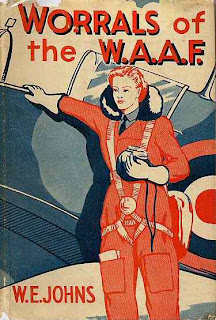 W. E. Johns was an extraordinarily prolific British writer with a career that spanned five decades. Altogether he wrote 169 books for boys, girls and adults, as well as editing several magazines about flying. His most famous female character is Flight Officer Joan “Worrals” Worralson. He wrote 11 Worrals novels, beginning in 1941 with Worrals of the W.A.A.F., which I found to be a fun book about flying and spying.

Worrals, 18, and her best friend Betty “Frecks” (because of her freckles) Lovell, 17, are in service with the Women’s Auxiliary Air Force, part of the RAF. The story begins with Worrals and Frecks complaining about how boring their job is simply ferrying aircraft to and from their makers for reconditioning. Worrals had tried flying a fighter plane against rules, but when one needs to be delivered to an RAF outpost, the only person on base who can fly it happens to be Worrals. During this 15 minute flight, a message comes over the plane’s radio that an unknown aircraft had been spotted and was to be stopped at all costs. Naturally, Worrals spots and follows it, sees the plane flying low over a golf course, sees a man running out of the surrounding trees and witnesses something tossed from the plane to the man. She continues to follow the plane as it flies off. Finally, she gets the unknown plane in her sights, presses the button on her plane’s gun control and fires. End of unknown, presumed enemy plane.

Suspecting that something is not right, Worrals and Frecks decide to return to the golf course that weekend. Sure enough, they discover a ring of spies who have created the golf course for the purpose of disguising a hidden runway that small enemy aircraft could use for landing and taking off. Worrals gets caught spying on the spies, but Frecks manages to get away. Worrals is taken to a nearby rectory and locked in a 3rd floor room with one barred window.

Frecks manages to find Worrals and they figure out how to free her and get her back on the ground. Before they get away, the spies come out of the house and the two girls hide on the floor in the back of a car. The spies take off in the car, and the girls overhear their plan to blow up a munitions dump. They arrive at a farmhouse and the girls sneak in to find a phone to warn the RAF of the plan. While there, they discover a map showing future bombing targets. Worrals makes her call, put the map in an envelope and puts it in her pocket just before they are caught by the spies. Worrals finds a gun by the phone and holds the spies off while she and Frecks escape. They take a car in the yard, complete with keys, and a car chase ensues. Worrals manages to mail the map to the air force base, but they are soon stopped by what appears to be a home guard roadblock. Unfortunately, it turns out to be part of the spy ring, set up to stop the girls. They are taken to the vicarage and locked in a room in the cellar. Tired from their escapades, the girls decide to get some sleep.

When they wake up, they are brought upstairs and told that the bombing of the munitions dump was foiled by the RAF. They are taken back to the cellar and given some food. Worrals tells Frecks that she took some matches and a nail file while they were upstairs. They immediately begin filing the lock on the door. After a few hours, they get the door open, but discover there is no way out. Rather, they find a trap door, open it and follow the tunnel behind the door. This leads to back the rectory. They climb up the bell tower just as an air raid begins. They realize the top of the tower has a set of colored lights that apparently are used to signal the German bombers. Worrals quickly covers the lights with her jacket and watches as the bomber tries to find his signal and finally gives up.

Of course, the girls are discovered by the spies on the ground, but manage to evade them, get back to the vicarage and hide in a large chest in the library.

The spies, knowing the jig is up, prepare for their escape. Their leader, who had gotten away with so much because he disguised himself as a vicar and lived in the vicarage, tells his compatriots that he is going to blow up the house and with it the real vicar, who is locked away upstairs. His plan is to use a timer on the bomb, so that they can get away in their plane hidden on the golf course. The plane’s nationality markings can be changed. He explains that they will use the German markings to begin with, change to the British until the get over the English Channel and then change it to German again. This way people will think it was their plane that bombed the vicarage.

Worrals overhears the plan, and as soon as the spies leave, she finds the real vicar and frees him just in the nick of time. He goes off to the village to inform the police about the doings of the spies, and Worrals and Frecks head for the golf course. Needless to say, the ending is very, very exciting. The girls manage to get into the plane’s cockpit and start flying it. Worrals gets it in the air, but flies low so she can crash in necessary, without killing them all. Meantime, the plane and the spies are hit by machine gun fire, but Worrals and Frecks are not. Worrals lands the plane, and one of the RAF’s aircraft land immediately after. Out come Worral’s Commanding Officer, McNavish, and her friend Flying Officer Bill Ashton. Spies are taken into custody and everything goes back to normal, until the next adventure.

Worrals of the W.A.A.F. is a fast, exciting book. It must have been highly entertaining to girls during the war, a female flyer in a world dominated by men and having amazing adventures. Girls would have been familiar with women like Amy Johnson, Pauline Gower and Amelia Earhart. And they may have even harbored dreams of flying like Petrova in Noel Streatfeild’s 1936 novel Ballet Shoes.

Worrals’ creator, W. E. Johns, had actually been a bomber pilot towards the end of World War I and had been shot down over Germany and held prisoner. He was supposed to be executed by firing squad, but the war ended first. During World War II, he was a lecturer for the Air Training Corps. He had already been writing flying adventures for boys with his books about pilot James Bigglesworth called Biggles, beginning in 1932. During the war, Johns was asked to create a female counterpart to Biggles in an effort to recruit young women into the Women’s Auxiliary Air Force and Worrals of the W.A.A..F. was the result. And I have often wondered how many women chose to enlist because of the adventures of Worrals. Of the 11 published, six take place during the war. While the stories may be a bit preposterous, the sense of war is very much present.

It originally was published in serial form in a popular girls’ magazine in England called the Girls’ Own Paper. It was reproduced in the Girls’ Own Annual, Vol. 62 (1941), where I first read Worrals of the W.A.A.F. Later I bought an inexpensive Canadian copy of the book. Copies of this book are still relatively easy and inexpensive to find.

This book is recommended for readers aged 12 and over.
This book was purchased for my personal library.

More information on W.E. Johns may be found at http://www.wejohns.com/


There is an interesting and informative article about Worrals by Jim MacKenzie, an extradinarily knowledgeable person, at Captain W E Johns and Worrals

Email ThisBlogThis!Share to TwitterShare to FacebookShare to Pinterest
Labels: Aviation, From the Archives