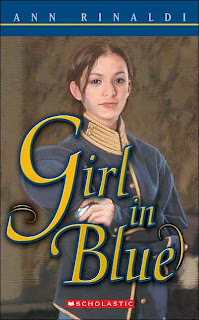 This is the story of Sarah Wheelock, age 16, living on her family’s farm in southern Michigan, with her mother, younger sister, older brother and an extremely abusive father who had betrothed her to an equally abusive older widower with small children.  Her mother has arranged to send her to Flint, Michigan to apprentice with an aunt who owns a millinery shop. But Sarah has other ideas.
It is 1861 and Sarah decides to pass herself of as a boy, named Neddy Compton, so she can join the Union Army and fight in the Civil War. She passes the cursory physical and travels, for the first time in her life, by train to Washington DC with her regiment. There, she is assigned to work for a doctor in an Army hospital until they are sent into battle. After the first Battle of Bull Run, the doctor discovers she is really a girl and refuses to let her continue her charade as a boy. He likes her, and finds her a job working for the Pinkerton Agency as a detective. She is placed as a maid in the house of a southern woman, Rose Greenhow, suspected of being a spy for the Confederates. Sarah’s assignment is to discover how the woman is sneaking information about the Union Army to Jefferson Davis.

This was a very interesting story, a little preposterous at times, but still well done. Rinaldi clearly did her research to write this novel. The character of Sarah was modeled on the life of Sarah Emma Edmonds, one of many women who passed themselves off as men and fought in the Civil War. Sarah Edmonds enlisted with the 2nd Michigan Infantry under the name Franklin Thompson, the same regiment Sarah Wheelock joined.

Rose Greenhow was indeed a Confederate spy, with a young daughter, little Rose. The fictional Sarah worked for Rose during her house arrest, from August 1861 through late fall 1861. Little Rose was allowed to stay with her mother during that time.

Allan Pinkerton had already established his famous detective agency before the Civil War began. During the war, he headed up the Union Intelligence Service, which later became the U.S. Secret Service.

History certainly provided Rinaldi with lots of material for a realistic novel. The fictional story of Sarah Wheelock adds to the excitement and, by using the first person, allowing Rinaldi to not only give some very realistic, graphic descriptions of Bull Run and her surroundings, but also Sarah’s reactions to them. Washington DC is a city I know my way around, with a history I have always been interested in, and only deepened my enjoyment of this novel. But then, I always enjoy Rinaldi’s historical fiction and Girl in Blue was no exception.

This book is recommended for readers 11-14.
This book was borrowed from the 67th Street branch of the NYPL.

For more information on Rose Greenhow as well as other women in the Civil War, see
Rose O'Neal Greenhow