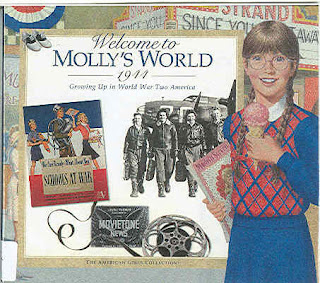 When Allison was two year old, I bought her an American Girl doll. At the time, 1990, there weren’t so many to choose from and I picked Molly because her historical period was my area of interest and I liked the idea of a doll from a specific period in history, along with some accurate accessories and novels that entertain and inform. But I also bought Molly because I was afraid the idea of a historical doll wouldn’t catch on. So much for my business sense!

Welcome to Molly’s World 1944 is a companion book to the whole Molly project. However, unlike the novels about Molly, this book is a social history providing a look at life during the war as a young person might have experienced it. The American Girls collection included this same type of book for each of their historical dolls, though much of their historical material and even some dolls have now been retired. These are truly wonderful books for familiarizing young readers with the major components of each period, and in the case of World War II, that also includes a basic introduction to the horrors of that war – the fighting and its resulting casualties, the Holocaust in Europe and the Atomic Bombs in Japan – without overwhelming them or scaring them away from ever wanting to know more. Each section includes a minimal amount of explanatory text and a collage of topical photographs, maps, letters, telegrams and other types of documents to provide a real sense of life at the time.

But words never seem to do real justice to pictorial books and so I am letting some of the pages from Welcome to Molly’s World speak for themselves. 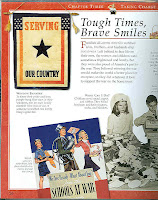 Each chapter looks at a different feature of the war and is divided into a variety of relevant sections. For example, Chapter Three “Taking Charge” covers the wide variety of things adults and children on the home front could do to help support the war. The next section describes the different kinds of jobs women took and the ways in which their daily lives changed because of those jobs – think Rosie the Riveter. There is a section on women in uniform, with a detailed look at the contents of a foot locker issued by the Women’s Army Corps (WAC). This is followed by a section on women in aviation, including an up close look at all the dials and instruments in the cockpit of a B-25 Bomber, which a female pilot in the Women’s Airforce Service Pilots (WASPS) would have to know all about in order to fly the plane. There is even a section on how pet dogs were volunteered by their owners to work in defense and the different jobs they performed.  Dogs for Defense is a little known facet of the war nowadays, but at the time, there were a number of books written for kids on the topic. 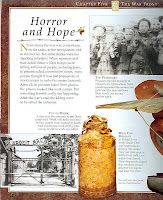 Even I found new things to learn, despite all my research on World War II. For example, I did not know about there were papers written by Jewish inmates in a concentration camp describing the horrors of what was happening to them at the hands of the Nazis. The papers were hidden in these milk containers and buried. Only two of the three containers have been found so far. (pg 42) 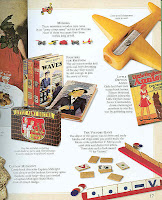 Despite shortages and rationing, kids still had some toys, books and games available to them, though not of the same quality as before the war.  Most things were made out of cardboard, wood and inferior paper. This page has particular interest to me (see below). (pg 17)

Another thing I did not know but was happy to discover is that the old Scotty dog pins I inherited were inspired by Roosevelt’s dog Fala, his faithful companion throughout the war (pg 15).

Welcome to Molly’s World was written by Catherine Gourley, who also wrote War, Women and the News.see The Children's War  The two books are structured in a similar manner, though I think Gourley did a more cohesive job on this book, making it one that I can highly recommend.
The American Girl Company has discontinued their line of Welcome to… books, but they are still available in both public and school libraries and may still be available in some bookstores or online. Ever since Mattel bought it, the emphasis of the company has been more on the girl of today, than on the historical aspects were the foundation of the Pleasant Company, the original American Girl creator.

This book is recommended for readers aged 7-12.
This book was borrowed from the Yorkville Branch of the New York Public Library.

More old books from my bookshelves. What a surprise to see them in Welcome to Molly’s World. The paper these books were printed on was so inferior, that the pages are quite literally burning themselves up at a much quicker rate than usual. 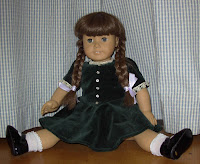