I was having dinner with an old friend last week and Thanksgiving Day plans came up. My friend said he was not planning on doing anything special that day. He felt that Thanksgiving had become a commercialized sham and that even the settlers who came to this country only came for economic gain and exploitation. Well, what he said was partly true. My dad came from Wales because this country offered more economic opportunities. He found them here, and was forever grateful. My mother’s Quaker ancestors came here back in the 1600s for religious freedom, economic opportunity and to live peacefully. My thoughts turned to President Franklin D. Roosevelt’s Four Freedoms address, which I have read so many times. This was a speech delivered to congress on 6 January 1941, ten months before the US was attacked and entered World War II. In 1943, during some very dark days when the war was raging in Europe and Allied Forces were fighting and dying to preserve freedom in the world, Norman Rockwell painted a series of four pictures, inspired by Roosevelt’s Four Freedoms speech.

And so I excerpt them here because they are good thoughts for Thanksgiving:


“In the future days, which we seek to make secure, we look forward to a world founded upon four essential human freedoms. 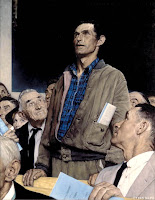 The first is freedom of speech and expression—everywhere in the world. 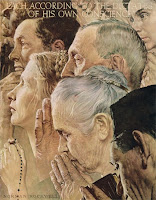 The second is freedom of every person to worship God in his own way--everywhere in the world. 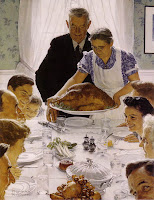 T he third is freedom from want—which, translated into world terms, means economic understandings which will secure to every nation a healthy peacetime life for its inhabitants—everywhere in the world. 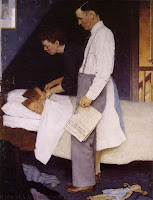 The fourth is freedom from fear—which, translated into world terms, means a world-wide reduction of armaments to such a point and in such a thorough fashion that no nation will be in a position to commit an act of physical aggression against any neighbor—anywhere in the world.

That is no vision of a distant millennium. It is a definite basis for a kind of world attainable in our own time and generation. That kind of world is the very antithesis of the so-called new order of tyranny which the dictators seek to create with the crash of a bomb.”


A HAPPY AND PEACEFUL THANKSGIVING TO EVERYONE
Posted by Alex Baugh at 8:31 AM

Email ThisBlogThis!Share to TwitterShare to FacebookShare to Pinterest
Labels: Thanksgiving