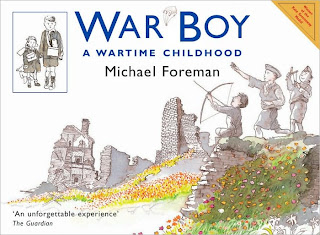 I have wanted to read War Boy for a while, but had to wait because I needed to get it through Interlibrary Loan. I love ILL, and have been able to get so many great books using it. Thank you, NYPL.

War Boy was written and illustrated by Michael Foreman and the result is a charming book about his early childhood during World War II. His purpose is clearly to show what life was like for him, and with variations, for many other kids in wartime England. It is structured in a series of vignettes or memories, which are, by turns, humorous, sad, frightening and heartwarming. Altogether, they give a trenchant impression of Foreman’s early years and the war’s impact on his life and the lives of those around him.

Relying primarily on his own beautiful watercolor illustrations, with minimal text, Foreman literally paints a picture of life in Pakefield, Lowestoft, a small town on the east coast of Suffolk, England during the war. Because of its location, Lowestoft was a target for German bombing raids due to its being a coastal town, its large naval base and the Minesweeping Service that was also located there. It seems only appropriate, then, that Foreman would begin his story by describing the night an incendiary bomb came through the roof of his house, and exploded up the chimney. His older brother Pud put the fire out by throwing wet sand on it that was kept in the backyard. Foreman has enhanced this story, as he does throughout the book, with drawings of cigarette cards, enthusiastically collected by kids before the war, in this case, showing in pictures what to do if an incendiary bomb landed in your house. This is probably Foreman’s earliest memory of the war, since he was born in 1938 and the bomb fell on April 21, 1941.

Foreman’s mother had a small shop in Pakefield and a wide variety of soldiers and sailors spent time there because of its welcoming and homelike atmosphere. As a small child, he learned some very colorful language thanks to these guys, and was often dressed up as a soldier or sailor and drilled by them: “I was often inspected in the shop, then marched up and down the pavement while massed ranks of tea drinkers shouted ‘Left Right, Left Right, About Turn, Pick Them Feet Up.” (pg 28)

Included in Foreman’s account are the games played by the children in the area, candy they ate, loved and often didn’t get, schooldays and holidays, as well as some of the local characters one seems to find in all small towns. Interspersed among these ordinary aspects of life are detailed drawings of common wartime items like barrage balloons, airplanes such as Dorniers ans Stukas, and Anderson and Morrison shelters and how they all work.

Though nothing is written about in great detail, the world that Foreman lived in comes through clearly and concisely. It is a book recommended for readers ages 7-9, but I think that older kids would enjoy it as well, in part because Foreman includes the kinds of things kids often think are funny, especially those that involve bodily functions. Foreman not only writes and illustrates his own books, but has illustrated many other books in his very distinct style.

An exhibition of War Boy was presented by The National Army Museum in London, which unfortunately closed in June 2010. However, thanks to Culture24videos and YouTube, there are four short videos of an interview with Michael Foreman at the museum which I include here: