From the Archives #5 - Mystery at Witchend by Malcolm Saville 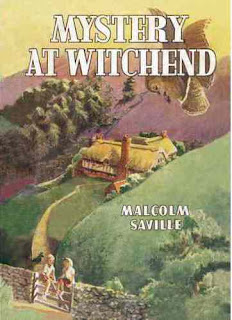 It has been a while since I have done a That's The Way It Was Wednesday post, so I thought I would start the new year off with one of my favorites - Mystery at Witchend.

This is the first Lone Pine book in a series of 20 which were written over a period of 35 years, beginning in 1943. It begins when the Mortons – mother, son David and 9 year old twins Dickie and Mary – leave the bombings of London for the countryside of the Long Mynd region in Shropshire, while Dad is off flying for the RAF. On the train there the kids meet a sailor, Bill Ward, who comes from the area. He tells them that they will have lots of adventures and fun at Witchend, their final destination, but to be careful of the weather and of the Stiperstones, a range of rugged hills topped with large dark stones, one of which is called the Devil’s Chair. Folklore has it, Bill Ward says, that when the chair is empty the weather is fine and clear, but when Satan is sitting in his chair, a thick, blinding foggy mist rolls in from the west.

The first friend the kids make after their arrival at Witchend is Tom Ingles, an evacuee living on his uncle’s farm where the Mortons get their milk. Tom is around 14, a bit older than David. Still fascinated by the stories Bill Ward told them, the Morton kids go exploring the Long Mynd region. Their goal, to reach the top, is ruined when Dickie gets stuck on a bog and, luckily, their next new friend comes along on her horse Sally and helps free him from it. Peter, short for Petronella Sterling, is also around 14 and lives with her father, who is responsible for maintaining the local reservoir. The kids continue up the mountain with Peter and spot a man rushing along, heading in the direction of a farm called Appledore. Peter explains that a Mrs. Thurston had moved in there 6 months earlier. Thirsty and tired, the kids also head over to Appledore for some water. When Mrs. Thurston invites them in, Macbeth, Mary and Dickie’s little Scotty dog and constant companion, refuses to enter the house and viciously snaps at her.

The next day, when Peter rides over, the kids decide to form a club, which would also include Tom Ingles, and call it the Lone Pine Club, after the single pine tree that stands in the hidden area they pick for their club hideout. While out, Mary and Dickie run into Mrs. Thurston and once again, Macbeth goes after her. Mrs. Thurston is on her war to Witchend to see Mrs. Morton and the twins feel obligated to go with her in order to protect the secrecy of their hideout. While at home, they see Mrs. Thurston kick the Macbeth, when the dog barks at her and she thinks no one is watching.

On their third morning at Witchend, Tom comes over early to ask Mrs. Morton if she will come to the farm and stay with Mrs. Ingles who has fallen, while he and his uncle fetch the doctor. Meanwhile, David goes to town to see if their bikes have arrived. The twins, left alone with the housekeeper, decide to have an adventure of their own and discover what appears to be a lost air force pilot sitting in the club hideout. He explains that he was looking for Appledore and Dickie decides to take him there. On the way they again meet Mrs. Thurston, who says she is bird watching to explain the binoculars she is always carrying. At Appledore, she gives the twins their tea and they start back home. But on the way the weather changes suddenly, as Bill Ward warned that it could and the twins get lost in the misty fog. After a while, they hear a plane flying low back and forth over them, followed by the sound of several owls’ hooting, one of whom turns out to be Jacob, a servant from Appledore. Cold and afraid, Mary and Dickie decide to tag along with Jacob against his will, and the three of them come across a man in a raincoat who has injured his ankle. Mrs. Thurston isn’t happy to see the twins again. When they ask her to drive them home, she says the car is broken and locks them in a bedroom for the night.

By now Mary and Dickie have been missed and David, Tom and his uncle eventually figure out where they are and go to Appledore. Hearing the dog barking, David climbs up to the bedroom window, gets the twins and the dog out and they all quietly sneak away.

So many suspicious things have gone on in just a few days, and the kids begin to suspect that Mrs. Thurston and her company are up to no good. Walking around with binoculars and claiming to be interested in bird watching, she has shown an inordinate interest in the area and in the reservoir under the care of Peter’s father. What could she and her visitors be up to? This is a war-time story so it is a pretty sure bet that all the excitement has to do with that. Yet, there were no munitions factories or air bases to spy on in the area, but they clearly behaving suspiciously. Ultimately the Lone Piners find out who Mrs. Thurston and her mysterious strangers are and what they are up to.

This is an exciting though slow moving story, in part because the Lone Piners must be introduced to the reader. Saville’s style seems to also be to provide lots of exposition and explanation throughout the novel, which is fine particularly since his writing is very pleasant to read. The story is dated only because it takes place during World War II, but holds up well for a present day reader. What is interesting about this character-centered novel is that the region plays the part of another character making it more than just the setting. In his forward, Saville explains that the Long Mynd and the Stiperstones actually exist, only Witchend, Appledore and Hatchholt, where Peter and her father live, are imaginary. The book also includes a map of the area which I found myself consulting a number of times as I read the story. 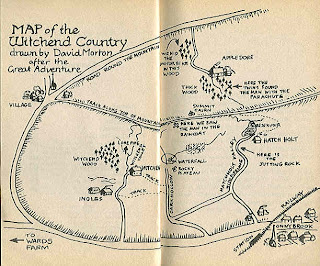 ﻿
On the whole, I found this to be a very enjoyable book and I would highly recommend it.

This book is recommended for ages 9-14
This book was purchased for my personal library. 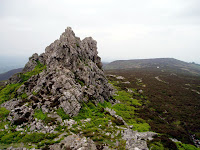 The Devil’s Chair looks foreboding even in good weather.  More information on folklore about this area of may be found at
Legend of the Devil's Chair