From the Archives #2: The Snow Goose by Paul Gallico

Did you run across that queer sort of legend about a wild goose? It was all up and down the beaches. You know how those things spring up. Some of the men I brought back were talking about it. It was supposed to have appeared at intervals the last days between Dunkirk and La Panne. If you saw it, you were eventually saved. That sort of thing… 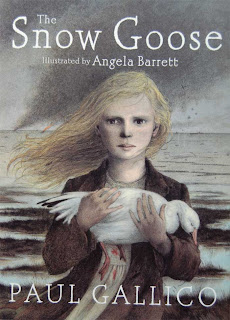 The Snow Goose was originally published as a short story in the Saturday Evening Post in the 9 November 1940 edition. A year later, it was released as a novella and won honorable mention in the O. Henry Memorial Prize competition.

The story centers on the reclusive, lonely, deformed painter Philip Rhayader, living in a lighthouse in the remote marshes of the Essex coast. One day, a young girl, Frith, the child of fishing people, brings him a snow goose that had been shot. Although she didn’t know Rhayader, she, like everyone else, was afraid of him because of his looks. Nevertheless, she overcomes her fear because Rhayader also has a reputation for loving all nature, and has created a sanctuary for birds flying south to live in until the spring comes and they head north again. Rhayader asks Frith to help him bandage the snow goose, and while they work, he tells her that it is a Canadian goose, making up a story about how it had lost its way in a storm and ended up off the coast of England. That winter, Frith comes regularly to visit the goose and Rhayader, but in the spring when it flies north, she stops visiting. Without them, Rhayader begins to feel his intense loneliness again and paints a picture of Frith as she looked the day she brought the snow goose to him. But each winter the snow goose returns and so does Frith. This goes on for several years, until one year neither of them returns. When the snow goose finally comes back to Rhayader’s sanctuary, it is more than a month before Frith visits, and when she does, Rhayader realizes she is no longer a girl. He also knows that the snow goose is not going to leave him and fly north again in spring.

The next spring, 1940, all the other birds migrate north earlier than usual because of the war, but, just as Rhayader had said, the snow goose remains behind. As she and Rhayader watch the birds flying away, Frith suddenly feels frightened:

“…and the things that frightened her were in Rhayader’s eyes – the longing and the loneliness and the deep, welling, unspoken things that lay in and behind them as he turned them upon her.” (pg 26)

Frith leaves and stays away for three weeks, but curious to see if the snow goose did indeed remain, Frith again overcomes her fear and visits Rhayader. She finds him busy packing his little sailboat. He explains to her that he is going to Dunkirk, to help rescue the soldiers stranded there. As he sails away, the snow goose follows him and this is where the legend of the snow goose begins.

This is also the part of the book where I always start crying, even as I write this.

The story is written in the style of legends or fairy tales, giving it that surreal quality that these types of stories often have (well, when they aren’t a Disney production.) The dialogue, what little there is, is written in dialect and may be difficult for young readers. In many ways, it is a classic beauty and the beast story, but without the characteristic kind of happy ending they always have.

The Snow Goose is an extremely sentimental; but also a very appealing story. As testament to its appeal, it has remained in print continuously since 1941. I had originally read the 1941 edition of The Snow Goose a while ago, which I had checked out of the library at Hunter College. I did not find it in the children’s section there. For this post, I checked it out of the local branch of the New York Public Library and it was in with Juvenile Fiction. My personal opinion is that it is a story more likely to be appreciated by older readers, perhaps kids in the 8th grade and up. It is a short story, though a complicated one and the intimation of Rhayader’s feelings for Frith and her response may add to that for younger readers still accustomed to fairytale romance.

The original 1940 copy of The Snow Goose, exactly as it appeared in The Saturday Evening Post has been made available online at:
http://www.saturdayeveningpost.com/2010/02/20/art-literature/fiction-poetry/snow-goose.html

The story was also made into a television movie by BBC and shown in the US as a Hallmark program in 1971. It starred Richard Harris as Philip Rhayader. Like Johnny and the Bomb, it has been put on YouTube in 10 minute increments and may be seen at
http://www.youtube.com/watch?v=z7PXmbcbpKM

I have mixed feelings about the illustration in the version I used, even though the artist, Angela Barrett, was shortlisted for the Kate Greenaway Award in 2009. Barrett is a talented artist, but I did not like her depiction of Rhayader. I thought she made him too primitive looking. I did like the way she envisioned Frith, the uncultivated, innocent child of the marshes. This, I thought, was the most hauntingly beautiful illustration of Philip Rhayader’s arrival at Dunkirk, and my favorite of Barrett’s illustrations (pgs 36-37.) I think she has really captured the legend-like quality of the story in them. 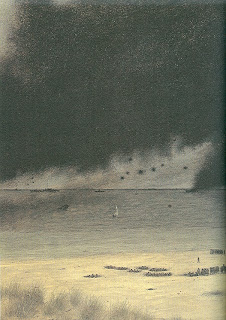 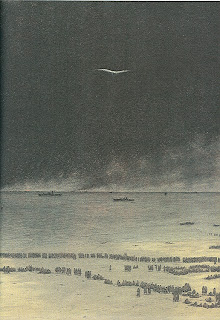 Warning: Keep some tissues nearby when reading The Snow Goose.
Posted by Alex Baugh at 7:06 PM

Email ThisBlogThis!Share to TwitterShare to FacebookShare to Pinterest
Labels: Dunkirk, Friendship, From the Archives, Home Front