From the Archives #1: Cherry Ames, Army Nurse by Helen Wells 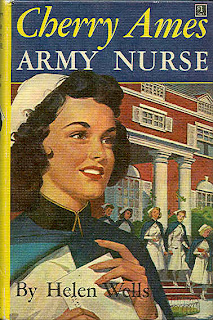 I was looking through my bookcases where I keep all my old books and came across some old Cherry Ames. I loved these stories when I read them. The early ones were especially meaningful to me because my mother had been a nurse and had taken care of wounded soldiers and veterans before she married – just like Cherry.


Cherry Ames, Student Nurse and Cherry Ames, Senior Nurse follows Cherry through her three years of nurses training at Spencer Hospital. In the first book, she decides to become a nurse because “she wanted to do vital work, work that the world urgently needs.” (pg 5) In Senior Nurse, an Army nurse comes to her graduation to make a plea to the graduates: “You are needed, desperately needed! If we are to save our men out there fighting for us – if we are to even win this war – you nurses must help. Are you ready to serve?” (pg 215) Naturally, Cherry, along with her entire class, is ready to sign up, thus forming the Spencer Unit.


Cherry Ames, Army Nurse begins with Cherry receiving her orders to report for active training. Soon the Spencer Unit is off to Fort Herold, NJ. Here the nurses, and the Spencer doctors who also volunteered, are placed under the command of Captain Paul Endicott. Endicott takes an immediate dislike to Cherry and her friends Dr. Lex Upham, her boyfriend, and Dr. Joeseph Fortune, an old family friend and a researcher.

At Fort Herold, the nurses perform hospital duty and receive 4 weeks basic training under the direction of Sergeant Deake. Deake is an Army loving male “who regarded all women here as intruders, nuisances and nitwits…” (pg53) So when Cherry calls him Lovey and the name sticks, he has even more reason to resent them. Of course, by the end of basic, Deake turned out to be a real old softy, despite the pranks the nurses pull on him.

During basic, Cherry also meets her corpsmen Bunce Smith. Good natured Bunce can’t do enough for Cherry and even tries to come to her rescue when she leaves bivouac during a simulated battle to help a small injured boy on a farm not far away. When she returns to camp, she finds, to her surprise, that it is gone. Bunce finds her, but so does Captain Endicott and trouble naturally ensues. Endicott doesn’t like Bunce any more than he does Cherry.

Ultimately, Spencer Unit is sent to Panama City, Central America to work in the Army hospital there. Tensions continue to grow between Lex Upham, Joe Fortune, Cherry, Bunce and Paul Endicott. Dr Fortune, who has been working on a malaria serum, is refused permission to test it out. But when Cherry and Bunce find an old Indian ill with what looks like a rare form of malaria in an old house she is exploring, she manages to get him treated with Dr. Fortune’s serum, though without proper permission.  Cherry and Bunce are put on probation, thanks to Endicott – a demotion for both of them and they must now prove themselves once again. The story, however, leads to a very dramatic conclusion..

When I started to reread Cherry Ames, Army Nurse, I expected to roll my eyes and mutter “How corny!” But I was pleasantly surprised. The book held up well after all these years. And best of all, Cherry is not perfect; she gets into trouble, breaks rules for the greater good, has doubts about her abilities as a nurse and about joining the army.  I like that.

Of course, the first 6 books in this series were patent patriotic propaganda pieces aimed at convincing girls to think about army nursing as a career.   I wonder how many girls were influenced by the Cherry Ames books to go into nursing during the war. And although there were other wartime nursing series written for girls, Cherry Ames seems to have outlasted all of them and have even been reissued recently. Perhaps they held up because Helen Wells went to a great deal of trouble researching the Cherry Ames stories so they would sound authentic to her wartime readers. In fact, almost 60,000 nurses served in the Army Nurse Corps the way Cherry and her friends did. The four week training program they went through under Deake’s supervision was authorized in July 1943 to quickly familiarize nurses with army methods and approximately 27,000 graduated from it. To compensate for the shortage of nurses this left on the home front, the Cadet Nurse Corps was formed. In Army Nurse one of Cherry's friends joins the Cadets in her junior year. (pg 31) This was a great scholarship program that trained about 124,000 young women to be nurses. In exchange for free tuition, books, uniforms, room and board plus some spending money, these young women would have to serve as military or civilian nurses until the end of the war. This is how my mom became a nurse

Two examples of recruitment posters for army and cadet nurses:

A picture of my mom, on the right, with a fellow nurse.  The young man was an injured soldier.  The picture was taken outside the hospital where she worked, not where she trained
Posted by Alex Baugh at 6:49 PM

Email ThisBlogThis!Share to TwitterShare to FacebookShare to Pinterest
Labels: Army, From the Archives, Nurses, Series Books