The Memory Keeper of Kyiv by Erin Litteken 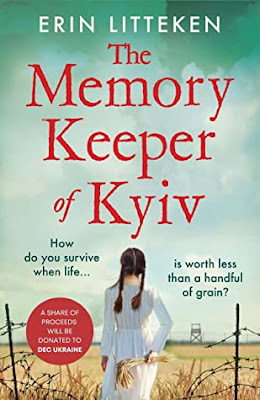 If you have been following the invasion of Ukraine by Putin's Russian army, you may find this to be a very interesting and compelling story, even though the events take place in 1930s Ukraine. The story introduces readers to Katya in 1929, 15 and surrounded by a loving family, and a future husband name Pavlo she is passionately in love with, and a table filled with an abundance of wonderful Ukrainian food, breads (Ukraine is, after all, the breadbasket of Europe). and delicacies.

Six months later, in January 1930, Joseph Stalin begins his invasion of Ukraine, which was already part of the Soviet Union, but his goal is to get rid of the Ukrainians by starving them to death. Stalin's activists encourage the people to join them and become part of their collective farming scheme, but Katya's family resists. Those not joining the collective have high taxes inflicted on them, then their food, farming equipment, and farm animals are taken in lieu of the tax money the Russians know they don't have. The resisters begin to disappear. As things become worse, Katya's father is arrested. And it is decided she will marry Pavlo, and her sister Alina will marry his brother Kolya. But when Pavlo hears that a resistance movement is being put together in the next village, he decides he must go and fight.

Flash forward seventy years to Illinois. Cassie, a widow who lost her husband a year earlier in a car accident while take their daughter out for ice cream, has all but withdrawn from life. But then her mother convinces her to move in with her Ukrainian grandmother, whom she calls Bobby, because of her age and her recent odd behavior. Cassie hears her taking to herself, and then begins to find food hidden all around the house and yard. She also finds a diary her grandmother has been writing in, but it is in Ukrainian. Luckily, there is an unattached, handsome man named Nick living down the street who is friends with her grandmother and who knows Ukrainian. Eventually, her grandmother decides that her story needs to be told and gives Cassie permission to work on it with Nick.

Ultimately, the two stories, told in alternating chapters, come together, and I don't think you will be very surprised to hear that Katya and Bobby are the same person. If I sound like I am making light of this novel, I am not, I just don't want to give too much away, and there is a lot going on. I found myself so drawn to young Katya's story, but some of the details were really difficult to read. I knew that Stalin was cruel, but I didn't know that he had committed genocide through starvation in Ukraine (the Ukrainian word for this is the Holodomor). I felt exactly like Cassie when she learned what her grandmother had survived "How did I not know about this?" And it certainly compelled me to do some research of my own to find out more about the Holodomor.

On the other hand, I have to be honest and say I wasn't particularly interested in Cassie's story. As soon as I read about Nick, I knew where things where going to go. So yeah, that part was predictable. But she was a good vehicle for adding more information about Bobby into the story. Trauma just doesn't go away and Bobby's life after she left Ukraine up to the present needed to be included.

The Memory Keeper of Kyiv is a book that I definitely recommend and I believe it will appeal to history geeks like myself, to anyone who have been following events in present day Ukraine, and there is even enough romance for fans of that genre.

Thank you, NetGalley and Boldwood Books for granting me a review copy of this book.