The Girl Who Could Fix Anything: Beatrice Shilling, World War II Engineer by Mara Rockliff, illustrated by Daniel Duncan 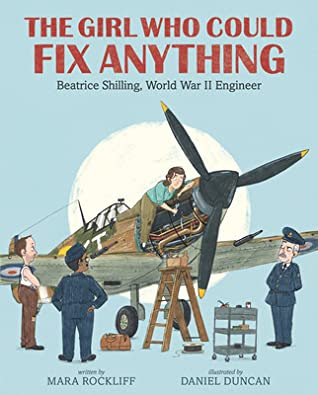 The Girl Who Could Fix Anything by Mara Rockliff,
illustrated by Daniel Duncan
Candlewick Press, 2021, 48 pages
I love picture book biographies that introduce kids to people and their achievements that they might otherwise never hear anything about. Case in point is this new biography about Beatrice Shilling (1909-1990) and her important WWII engineering accomplishments.

Beatrice always seemed to be the person who was different. As a girl, she preferred tools to sweets, enjoyed taking mechanical things apart and putting them back together, often improving them. Instead of a bike, Beatrice began saving for a motorcycle at age 10. 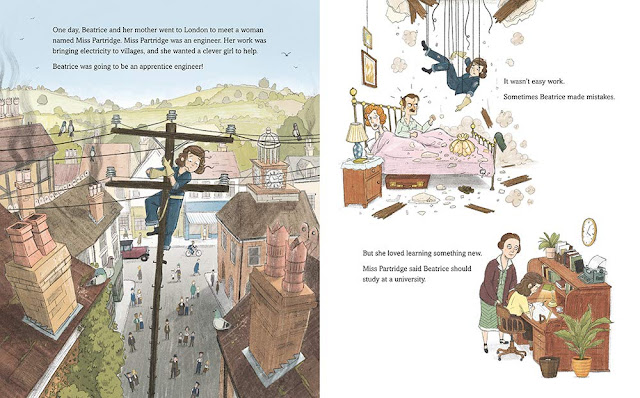 When she was older, Beatrice was eventually hired as an apprentice by one of the few woman engineers, Miss Partridge, whose job it was to bring electricity to people. And it was Miss Partridge who encouraged Beatrice to go to university to study engineering. Not surprisingly, she was the only female in the class. And also not surprisingly, despite graduating with honors in electrical engineering, only the men in her class could find jobs. 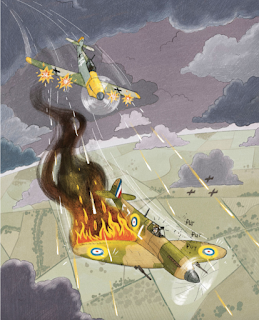 Beatrice had to settle for a job writing handbooks about plane engines (I used to write handbooks for computer users, so I know just how bored Beatrice must have been). But eventually, she was given a hands on job, and met George, a man much like Beatrice, who became her husband. Beatrice loved her new job, but her expertise was really put to the test when WWII began and the RAF were losing pilots and planes when their engines suddenly quit in the middle of a dive during a dogfight.

Could Beatrice figure out how to solve the problem in a timely, cost effective way that wouldn't require taking apart the planes engine? Of course she could - and did.

The Girl Who Could Fix Anything is a wonderful picture book for older readers. Rockliff shows readers that here was intelligent, persistent woman who followed her passion, loved to find out how things worked, and found ways to fix or improve engineering problems, but who also made mistakes, something I think is important for young readers to know about. The writing is light but informative, and the technical details, for example, the fix Beatrice came up with for the RAF, are presented in an easy to understand manner. The subtly colored digitally created illustrations completely harmonize with the text. Back matter includes an Author's Note that provides more about the life of Beatrice Shilling, as well as Selected Sources.

The Girl Who Could Fix Anything is a book that should be in every STEM home, classroom, and school library. Beatrice Shilling is an inspiration to young girls everywhere who might just be a little different from their peers, having an interest in engineering and how things work.

This book is recommended for readers 7+
This book was eARC gratefully received from Edelweiss+
Posted by Alex at 12:04 PM