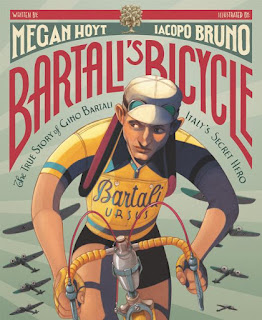 For eight year, Gino Bartali rode his bicycle around Italy, memorizing trails and paths, winning races and collecting trophies and first-place ribbons. He was such a good racer that in 1938 Gino won the  grueling Tour de France. But it was after that race that Gino noticed things were changing at home in Italy. 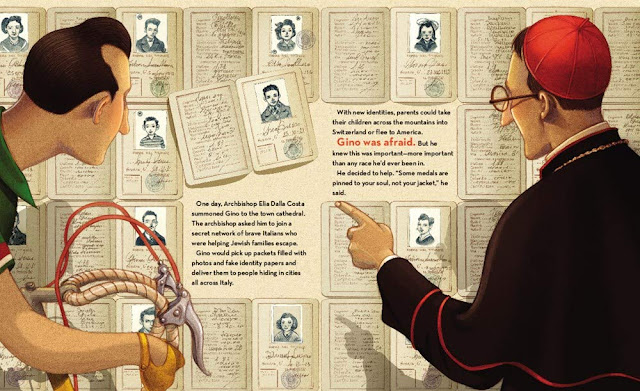 Soldiers marched through Europe and soon the world was at war. Jews, who were blamed by some for Europe's ills, were rounded up and arrested. Gino had trouble believing the lies these leaders told about Jews. But Jews had already been denied any freedoms, and now they were being rounded up and arrested. Watching these abuses, Gino thought he needed to do something to help them. Summoned by Archbishop Elia Dalla Costa, Gino was asked if he wanted to become part of a network of Italians who were working to provide false identity papers to help Jews escape Italy and flee to countries like Switzerland and America. 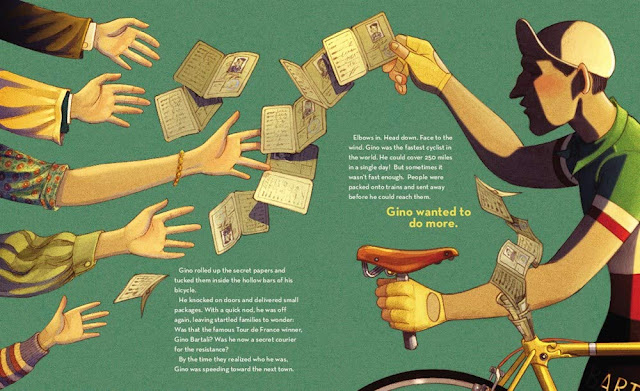 Despite being afraid, Gino began rolling up and hiding the forged identity papers in the hollows of his handlebars and other parts of his bike. He then began to use his cycling skills and the paths and trails all over Italy he had memorized earlier to pick up and deliver packages of these precious documents to anxious, startled families.

But Gino did more that just deliver identity papers. For example, when Gino learned the soldiers were looking for his best friend's family, the Goldenbergs, he hid the whole family in his cellar for the duration of the war. Another time, capitalizing on his fame as a cyclist, Gino put on his racing clothes and headed to the train station where soldiers were herding arrested Jews into a train. Gino distracted the guards so that resistance workers could lead the Jews to different trains that would take them to safety. Another time, forced into the military, Gino used his uniform to find and help prisoners of war that were being held by the Italians. He led 49 English soldiers out to safety and no one took any notice of it. 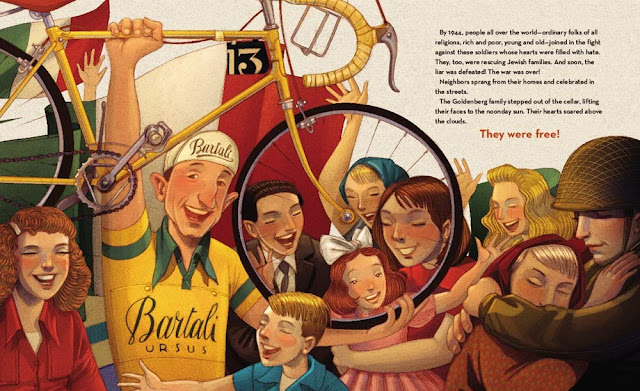 No one really knows how many people Gino helped to save. Some say more than 800, others dispute that figure. Gino never talked about his wartime activities and no records were kept by the resistance (for obvious reasons). Regardless, Gino has been named "Righteous Among Nations" by Yad Vasham, the Holocaust Remembrance Center in Israel for his wartime work helping to rescue Jews.

Bartali's Bicycle is a well-told, well-organized picture book for older readers that introduces this brave man to today's children. Discovering new heroes is always inspiring, and this one is made particularly so thanks to the accompanying illustrations, done in a style and subtle palette of colors appropriate to the period. Both author and illustrator gave an amazing amount of attention to detail that is unusual in a picture book, even a picture book biography like this one.

Back matter includes a Timeline, a letter from Gino Bartali's granddaughter, Lisa Bartali, an Author's Note and an extensive list the the sources used by the author.

Bartali's Bicycle: The True Story of Gino Bartali, Italy's Secret Hero would be an excellent addition to units on the Holocaust and World War II. And, in fact, you can download a free Teaching Guide for it from the publisher, HarperCollins, HERE

This book is recommended for readers age 8+
This book was borrowed from the NYPL
Posted by Alex at 5:54 PM