The Missing: The True Story of My Family in World War II by Michael Rosen 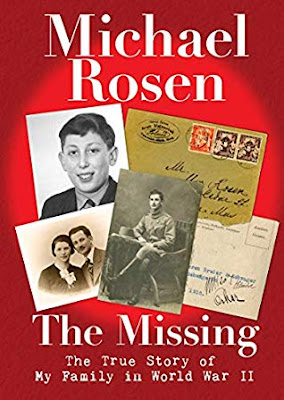 Michael Rosen is a beloved British children's book author, perhaps most well-known for the picture book We're Going on a Bear Hunt (1989). Now, he has written a book about a personal journey he took to discover what happened to his Jewish relatives that had been living in Europe and who disappeared during World War II and the Holocaust.

Rosen begins with some informative history about his family. His mother's family had lived in London, and as a young boy, Michael loved visiting them and going out for bagels with his Zeyde (grandad in Yiddish) or shopping with his Bubbe (granny in Yiddish). His great grandparents on this side came from Poland and his grandmother Rose had been born in England. When she married, she and her husband Morris moved to the United States, which is why Michael's dad is American. But when the marriage ended, she returned to London. During the war, his dad was an American soldier, and growing up, Michael loved to hear his stories about his time as a soldier.

Grandad Morris had one brother Max who also emigrated to the United States, and six other siblings, four of whom remained in Poland and two who emigrated to France. Whenever young Michael would ask what happened to the six siblings, his dad would answer "I don't know...They were there at the beginning of the war, but they had gone by the end. I suppose they died in the camps."
A brief recounting of Hitler, the Nazis and their treatment of the Jews followed this brief family history. Because of an early interest in France and French, Michael decided he first wanted to learn more about the fate of his two uncles, Oscar and Martin, who had lived there before the war. At first, he didn't find much, but then his cousin Teddy in the United States sent him two letters that had been written by his great Uncle Oscar. This was the opening Michael hoped for.
He spent the next several years trying to find out just what happened, and while Michael didn't find all the answers to his questions, he did find enough so that his relatives would no longer be simply "missing" but will be remembered and memorialized not just in this book, and in his poetry, but the names Martin  and Oscar are now on the commemorative wall at the Museum of the Shoah in Paris. Michael Rosen's journey is poignant, heartbreaking and personal, and in the end, his young readers will be able to  look at and understanding history through one family's experience. And it is all told in simple, clear and accessible language.

Interspersed in this family history are poems that Michael Rosen has written over the years about his relatives while he was searching for the missing members and which are strategically placed throughout. There is a humorous poem called "Bagel" is about going out for bagels with his Zeyde, while a poem called "Dear Oscar" affectively imagines what his ride in a cattle car to Auschwitz might have been like.

The book ends on a hopeful note that today's children will develop empathy and understanding towards other people, especially those who are different from themselves, and not fall for the racist, xenophobic rhetoric that is once again on the rise throughout the world.

There is really extensive back matter that includes a Bibliography of first hand accounts and other nonfiction books  about WWII and the Holocaust, recommended fiction for young readers, fiction and nonfiction recommendations about today's refugees.

The Missing: The True Story of My Family in World War II is the perfect accompaniment for anyone interested in the war, the Holocaust, and it is especially recommended for anyone studying these units in the classroom or being home schooled. I can't recommend it highly enough.

This book is recommended for readers age 10+
This book was purchased for my personal library from Book Depository, however, I understand Candlewick Press will be publishing it in the United States on September 8, 2020.