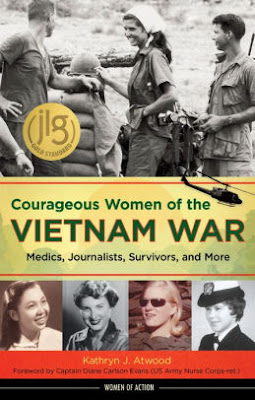 "Vietnam is like a huge jigsaw puzzle where none of the pieces fit"
Today, I digress from WWII. March is Women's History Month and today is International Women's Day, a time for celebrating women and their achievements. In this book about women in Vietnam, Kathryn Atwood not only presents the reader with some incredibly brave women, but uses their accomplishments to fit the puzzle pieces together to form a whole picture of the events to shaped Vietnam between 1945 and 1975.

Organized into five distinct chronological parts, each part gives a brief history detailing the political events that were occurring both within and outside Vietnam's borders, pivotal events that were often the result of the actions of outsiders, first the French and later the Americans. This political history is seen through the lens of the fourteen brave women profiled. These are women who came from different backgrounds - Vietnamese, American, French, Australian, and New Zealand, and each for their own reasons. Who were these amazing women?

One example is Geneviève de Galard, who came from a long line of French ancestors that had always proudly served in the military. In 1953, at 27, she followed in their footsteps as a military nurse and part of an evacuation team that transported wounded soldiers from remote parts of Indochina to Saigon and Paris. On one mission to Dien Bien Phu, surrounded by Vietminh artillery assaults, Geneviève realized she would be on the ground indefinitely helping to care for the wounded, where she was "in a way, a mother, a sister, a friend" as well as a nurse.

Almost as soon as US Navy nurse Bobbi Hovis received her orders in 1963, she was on a plane heading to Saigon. There, Bobbi and other medical personnel spent their days turning a filthy, rickety apartment building into a hospital. As wounded arrived, improvisation became a way of life. In November 1963, a coup to overthrow South Vietnam's unpopular leader Ngo Dinh Diem began, then later that month the news of President Kennedy's assassination was announced. Fighting in Saigon increased with the threat of killing two Americans a day, and in February, the VietCong bombed Bobbi's favorite movie theater. But it was the photo of a dead soldier's wife and children that finally made Bobbi realize she had had enough.

New Zealander Kate Webb decided to go to Vietnam as a journalist because it "...was simply the biggest story going, and [she] didn't understand it." Beginning as a freelance reporter in Saigon, Kate wrote about things that interested her, spending time with the Army of the Republic of Vietnam (ARVN). Eventually, she made her way to the Cambodian border, where the US allied Khmer Republic had just been put in place. But the Cambodian communists, the Khmer Rouge, were also becoming stronger and soon a civil war broke out. Kate covered the fighting and when it was over, found herself, along with other reporters and cameramen, prisoners of the NVA (North Vietnamese Army). Marched northward, starved, lacking water, regularly interrogated, tortured, and expecting to be killed at any moment, Kate survived her 23 day capture, but not without serious PTSD.

You may not recognize the name Kim Phuc, but most likely you know who she is. On June 8, 1972, Kim's family had taken refuge in a temple with others when bombs filled with napalm were dropped. Kim's clothing and body were burned by the napalm from a second bomb, and photographer Nick Ut captured her running away naked and screaming in pain. Kim's photo made history, but not her years of pain and recovery. Year's later, she became the pawn of a communist official named Hai Tam, who used her to lure western journalists with the promise of an interview and forcing Kim to leave medical school. Eventually, Kim did get away from Hai Tam, married and lives in Canada.

I tend to avoid books about the Vietnam War. It was always so confusing, and there was so much controversy surrounding it in the United States between supporters and protesters, it just seemed easier to ignore. So I have to admit, I approached this book with some trepidation.

What I found is a well-crafted book about women of courage. And not all of them were on the side of South Vietnam, nor were they all pro-war. All of their stories are fascinating, and include what later became of them after they left Vietnam. Kim Pfuc's story is a good example of that, so is that of the navy nurse Kay Wilhelmy Bauer who worked as a recruiter when she returned home. Kay indirectly survived the war when her neighbor's house was bombed by protesters, killing the people who lived there, by mistake. I was particularly happy to see Joan Baez included. Her political songs and visit to Vietnam may have been popular with anti-war protesters, but some veterans felt she had contributed to the terrible treatment they experienced when they returned home from Vietnam. As she told them, it was the war, not the veterans, she was against. This proved to be an important lesson about distinction to learn, when the US entered future wars not of the soldiers making.

The great thing about Courageous Women of the Vietnam War, and in fact, all of Kathryn Atwood's books are that they are not young reader editions of adult books. They are first and foremost written for young adults so that they read smoothly but without talking down to the reader. Unfamiliar terms are clearly explained, and the intros to each part of the story make the complicated Vietnam War understandable. There is a map at the beginning of the book, which is always helpful, and I found myself referring to it more than once. Back matter includes a Glossary, Notes, and an excellent Bibliography.

In her Introduction, Atwood writes that "when women volunteer to participate in a war, they exhibit  a particular kind of courage, to face not only the dangers of battle, but also the negative opinions - perhaps even their own - of those who don't believe them capable of enduring war's grueling difficulties." (pg. 5) As you read these 14 amazing stories, I think you will see that particular kind of courage present in each one of them.

This book is recommended for readers age 13+
This book was sent to me by the publisher, Chicago Review Press