True Brit: Beatrice - 1940 (Book 1 in the Far and Away trilogy) by Rosemary Zibart 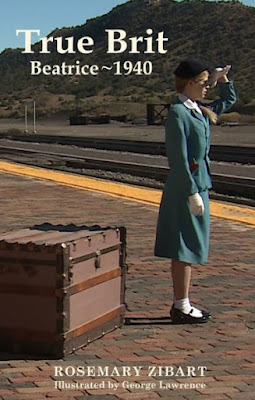 It's September 1940, the Blitz is already in full swing, and the last thing 12-year-old Beatrice Sims wants is to be sent away to Santa Fe, New Mexico for safety while her family, parents and older brother, stay behind in London. An upper middle class girl, Beatrice travels in first-class comfort, first by train, then by ship across the Atlantic Ocean, and finally, by train across the United States from New York to New Mexico.

Before she leaves London, her father suggests Beatrice think of her trip as an adventure and herself as an explorer, giving her a red leather notebook to fill with all the different and interesting things she will see and do and experience while away. Her mother, however, is convinced that the war would be over by Christmas and Beatrice would come home.

Arriving in Lamy, New Mexico, Beatrice finds herself alone in a small train station, with only a sleeping cowboy on a bench. Eventually, Clem Pope arrives with two chickens and a beat up truck named Maude. Clem is the local practical nurse, the only one around now that the world was at war and everyone expected the US would be in it soon enough. Her house is comfortable but nothing like Beatrice is accustomed to.

The first day of school, Beatrice meets Esteban, son of Delores, who helps Clem in the house, and Arabella, who introduces her to her new surroundings as only a 12-year-old would know them. But soon enough, Beatrice discovers that Esteban and his friends think she is faceta, a spoiled little Princess. Beatrice is upset by this nickname, especially because she really likes Esteban. Hurt that the kids think about her that way, she also discovers and can't understand that many Americans don't want to get involved in the war in Europe or help England in its fight against the Nazis.

But when Beatrice decides the change her reputation, she discovers it isn't as easy as she would have liked. After a few unfortunate incidents, things aren't looking good. It will take one big life-or-death incident to really turn things around for Beatrice, not just how others see her, but, more importantly, how she begins to see herself.

True Brit is the first book in Rosemary Zibart's trilogy about the different experiences of young people from war-torn countries during WWII, now living on the American home front. It is an engaging story, one I found I couldn't put down. And I thought Zibart really did a great job in depicting Beatrice's culture shock as she begins to adjust to her new surroundings. I could understand how Beatrice felt since I was once a New York City girl who found myself living in a desert area for four years.

Zibart also looks at the class differences between Beatrice and Arabella and most of the kids they are in school with, kids who are native, biracial, and poor by comparison. Yet, neither one is presented as better than the other, but accepted for who they are as people. In that regard, readers see how the stereotype ideas Beatrice arrives in New Mexico with about the land, culture and people are dispelled as she gets to know and understand her new surroundings better. Beatrice does records her adventures in the red notebook her father gave and these entries give the reader more insight and information than even Beatrice's first-person narration does.

Of course, True Brit are some humorous moments - her first hot dog with mustard and relish, her first milkshake, and American slang - is all A-okay. But it is the eye-opening experiences that she has that really make a difference. Beatrice arrived in New Mexico, very much a fish out of water, a self-involved, pampered and privileged girl who expected to be taken care of by servants much the way her mother is. And yet, despite her flaws, I found Beatrice to be a likable character who really grows and comes appreciate her new, temporary (?) home.

Astute readers who are also fans of The Lion, The Witch, and the Wardrobe by C.S. Lewis will like the scene on the train station where Beatrice sees and envies a girl named Lucy and her siblings getting on another train to stay with great-uncle in the country. Interestingly, Beatrice recalls that scene later in the book as she wishes she could be a comfortable as Clem is in her new setting, and envying those four children again.

True Brit is an interesting, informative book that gives readers another detailed look at the life of a young girl in WWII who finds herself in a totally different land and culture than what she is accustomed to.

You can download an Activity and Discussion Guide courtesy of the publisher, Kinkajou Press, HERE

This book is recommended for readers age 9+
This book was sent to me by the publisher, Kinkajou Press
Posted by Alex at 9:12 AM