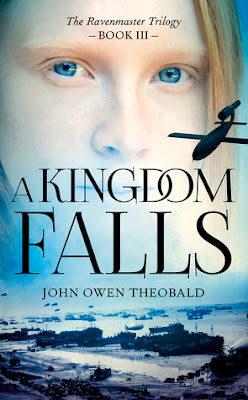 When last we left Anna Cooper and her boyfriend Timothy Squire, it was June 5, 1944 and the D-Day invasion was about to begin. Timothy and his friend Arthur Lightfoot, both sappers, are on their way to France with orders to disarm bridges wired by the Nazis so that the Allies could pass over them safely when they arrive. Book 3 begins the very next day - June 6, 1944.

Anna, still in London, has learned that the father, Wilhelm Esser, she believed to be dead, has had a big hand in developing Hitler's Vengeance Bombs, or V2 bombs that are so fast and powerful, there is no escaping or surviving them. After her father gives her the information about how the bombs work, and where they are being sent from, Anna decides to hide her father in the Tower of London, her official home.

But having the information about the bombs doesn't mean anyone will listen to Anna. Especially after an not after she loses her pilot's licensee and is stripped of her wings. Anna may have been grounded but her fellow pilots in the ATA aren't and their commander, Pauline Gower, isn't above turning a blind eye on the use of Spitfires with which Anna and her friends can practice dive bombing under the tutelage of Joy Brooks. Joy, you will remember, is an African American pilot who couldn't fly for the Untied States, but was welcomed into the ATA. And, oh yes, Anna manages to get some wings and papers to fly, just maybe not her own.

Meanwhile, Timothy Squire and the other men in D-Company are in France, but not where they should be, landing in a swampy river and losing most of their equipment and a few men. Eventually, Timothy and Arthur get separated when they are attacked by Germans, and Timothy is sure Arthur has been killed. Timothy is eventually found by a group of French partisans and spends the rest of the war fighting with them.

When his family receives notice that Timothy is missing in action, Anna never loses faith that he is alive and will return to her.

A Kingdom Falls is an exciting third novel. There is perhaps more action both on the battlefield and at home in it than in the previous novels as the war draws to a conclusion, but that would be expectable. And readers should never lose sight of the fact that Anna and Timothy are still just teenagers. But war matures young people fast, and Theobald has taken that into consideration as he developed his characters. It may not be quite as obvious with Anna and Timothy, but is sure is with Anna's friend Florence Swift. In These Dark Wings, Flo spent the blitz in Canada, learning about comics and ice cream. She returned to England in What the Raven Brings, but it is in A Kingdom Falls Flo decides to become a nurse in France, and you can see how she has changed.

One of the things I liked about The Ravenmaster Trilogy is that Theobald writes from different points of view, and in A Kingdom Falls readers knows just what is happening to tow more familiar characters, including pilot Cecil Rafferty, rich, handsome, but rejected by Anna, and, of course, Flo. The switching of point of view throughout is not the least bit confusing and really adds to the excitement and tension of the novel. I have to confess that I secretly wanted to hear directly from Anna father, the Nazi Will Esser. I really wondered what he would have to say, but readers learn much from his through his interactions with Anna.

I am sorry to have to say good-bye to Anna and Timothy now that the trilogy has come to and end, but I was glad that Theobald brought it all to a very satisfying conclusion.

A Kingdom Falls, and in fact, all three books in The Ravenmaster Trilogy, offer an exciting window into many aspects of World War II and how it impacted the lives of young people. Theobald handles themes of war, friendship, loyalty, love, betrayal and survival in the lives of his characters realistically through his engaging narrators. I can't recommend this trilogy more.

This book is recommended for readers age 11+
This book was sent to me by the author, John Owen Theobald
Posted by Alex at 7:38 AM