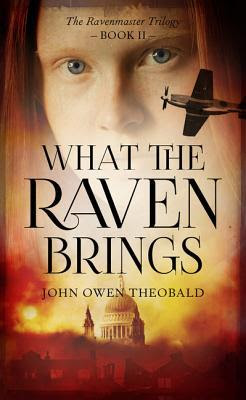 These Dark Wings (Book 1 of the Ravenmaster Trilogy) ended in September 1941. The blitz had been over for a while, but daily life was still hard. Anna Cooper, whose mother was supposedly killed in an air raid, was still living in the Tower of London with her Uncle Henry. Uncle Henry was on the mend after a serious illness. The mystery of the disappearing ravens had been solved, Anna and Timothy Squire became friends, though she can’t forget his forages into bombed homes to see what he could find there. Much to her happiness, Anna received a letter from her best friend Flo that she is returning to England from Canada, where she had been evacuated to during the Blitz. And Anna’s father, a German and a Nazi, was in London and knows where she is.

And so, in May 1942, Book 2 begins. As the war continues, Uncle Henry, Anna’s guardian, has passed away and left Anna in the care of Yeoman Oakes, much to her chagrin. Uncle Henry’s dying wish was that Anna, who is now 15, be the new Ravenmaster, but the Tower of London authorities refused to let a female do a traditionally male job, no matter how good she is at it, and so it is given to Yeoman Stackhouse, who has absolutely not interest in the ravens, or in the legend that there must always be six ravens in the Tower of London or the monarchy and Britain will fall. Instead, it is recommended that Anna work at as a canteen girl (with NAAFI or Navy, Army, and Air Force Institutes).

Meanwhile, Timothy Squire is up in Scotland learning how to be a sapper, a soldier who builds and repairs roads and bridges, lays mines, and who sometimes defuses bombs. Unfortunately, Timothy and his partner Arthur Lightfoot are not very good sappers and find themselves back in London, working on the docks.

With Timothy home and helping out with the ravens, it’s time for Anna to leave the Tower and do something useful. With forged papers, Anna joins the WAAF or Women’s Auxiliary Air Force. But her career in the WAAF is short-lived when she proves herself to be pretty incompetent at everything. But luckily, a RAF pilot takes her for a ride in a plane, and next thing Anna knows, she’s being sent to the ATA, or Air Transport Auxiliary. There, Anna learns to fly and begins ferrying planes around Britain wherever they are needed.


But while Anna is finding her place in the war, she is also growing up and finding herself attracted to the opposite sex, and trying to cope with new feelings of jealousy. And the truth about what really happened to her father, and her mother’s death, still continues haunts her, coming up in her thoughts and memories until the realization of what really happened suddenly hits Anna. But it is Timothy, given a second chance at becoming a sapper, who may have the answer to what Anna’s father wants from her and why he hasn't returned to Germany.. But is Timothy willing to risk everything, including losing Anna, to stop him? And what does her father have to do with Hitler’s newest weapon the V1 bomb, his Vengeance bomb?

We all know that sometimes a second book just doesn't live up the promise of the first book, but that is really not the case with What the Raven Brings. Less focused on life in London and in particular, the Tower of London, Anna life has really broadened out, even if she did have for get Yeoman Oakes to forge some papers for her.

Consequently, Theobald has given us a very interesting, exciting coming of age novel, one that takes Anna into young adulthood and he has captured all the mixed emotions that a girl her age might experience. For example, Anna is jealous when she thinks that Timothy is interested in Flo, but finds herself somewhat attracted to an RAF pilot. And although she loves flying, Anna is afraid to take control of a plane alone, at least until she does it.  I actually liked this book better than the first one, which I also enjoyed. I just feel that Anna and Timothy have much more depth to them as characters.

But Theobald has also given us a window into what the war was like on the home front. The hardships people faced and how they dealt with life under seize. I thought the part where Timothy gets caught up in a mad crush of people trying to get into a tube station during an air raid was particularly poignant, demonstrating how really desperate people can get under stress. It is sadly based on a true event, the wartime disaster at Bethnal Green Tube Station in which 173 people were crushed to death. Timothy, needless to say, clearly suffers from PTSD afterward.

Another nice touch is the way Theobald included American women pilots who were in the ATA with Anna. Joy, the African American pilot who teaches Anna how to fly and becomes her friend, points to the fact the women of color could not fly for the US now that America has entered the war, but were welcomed in the ATA, along with other Americans.

If you are looking for an exciting, honest multi-faceted wartime MG/YA book, What the Raven Brings may be just the ticket. It thoughtfully explores themes of friendship, loyalty, courage and fear during times of great difficulty and danger.

Now, I am really looking forward to reading the last book in the Ravenmaster trilogy when it comes out.

This book is recommended for readers age 9+
This book was sent to me by the publisher, Head of Zeus


I have included links to Wikipedia articles in this review about things that young readers may not be familiar with.
Posted by Alex at 12:05 PM