The Turnkey of Highgate Cemetery by Allison Rushby 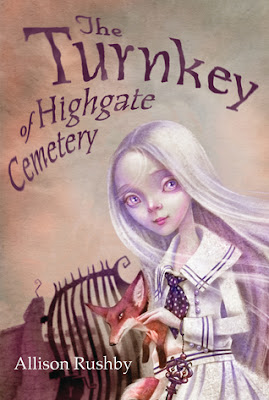 It's December 1940 and London is being bombed night after night by the German Luftwaffe. In Highgate Cemetery, however, the souls who are buried there are, for the most part, at peace, thanks to Flossie Birdwhistle, 12. Flossie had died of rheumatic fever, and now served as the turnkey or keeper of the key, of Highgate. It is her job to make sure everyone stays peacefully at rest there. As turnkey, Flossie must stay awake and can even leave the cemetery, sometimes visiting the Golden Galley atop St. Paul's Cathedral, a tranquil place overlooking London until the war began. But one December night, she runs into someone else up there - a man who was clearly dead and part of the spirit world, though not a turnkey, and dressed in the uniform of a Nazi officer and carrying a strange looking round glass object. When he sees Flossie, he quickly flees.

Confused, Flossie decides to visit her friend Ada, the Turnkey of Tower Hamlets cemetery. No sooner does she tell Ada what she saw, than the Turnkey of Brompton Cemetery shows up with at least 100 souls dressed in the uniform of the *Chelsea Pensioners. The men are there because of the Blitz, but are soon drawn into the mystery of the Nazi officer in the SS uniform carrying the mysterious round object.

On a quick trip to the Invalids' Cemetery in Berlin, Flossie learns from the Turnkey there that the officer is part of the Ahnenerbe. But what is that? Is the officer a German spy? How can that be if he's already dead? And why does he know who Flossie is?

The Turnkey of Highgate Cemetery is indeed a mystery...and historical fiction...and a ghost story.  And yet it just didn't grab me until Flossie sees the SS officer on the dome of St. Paul's. A ghostly Nazi looking out at the bombing of London by the Luftwaffe reminded me that the the Nazi's, particularly Heinrich Himmler, head of the SS, had been interested in finding the "spiritual" roots of Germanic or Aryan heritage. That made this a definite game changer.

Flossie may only be a 12 year old protagonist, but she's smart and unrelenting in her pursuit of solving the mystery of the Nazi, especially after it becomes personal. But she's also compassionate and cares very much about the souls at rest in Highgate, as evidenced in the sub-storyline about Grace, a young girl injured in the Blitz who straddles life and death while trying to find her family. I could have lived without Grace's story, but I think it would have made a great sequel to this novel.

Highgate Cemetery is such a perfect setting for this story. It's creepy enough to make me never want to be there at night, but the spirits from all the London cemeteries are not the least bit scary:

The story does take a few unexpected turns that I didn't see coming and I liked that a lot. In fact, a lot of people have compared this novel to Neil Gaiman's Coraline and The Graveyard Book, and I suppose they are similar in a way, but I think The Turnkey of Highgate Cemetery does a good job of holding its own.

I also thought that Rushby did a spot on job of presenting the Blitz in all its horror, and I liked Flossie's visits to the war rooms of the British and the Nazis, but I think one of my favorite things was the presence of the helpful Chelsea Pensioners in their tricorn hats and bright red coats. Which reminds me: The Turnkey of Highgate Cemetery was originally published in Britain, and there may be some bits that young American readers don't not know about. Some of them are covered in the Author's Note, but not the Pensioners (see note below).

All in all, however, The Turnkey of Highgate Cemetery is a great novel for anyone interested in WWII fiction, fans of ghost stories, and those who like a really good mystery.

This book is recommended for readers age 9+
This book was sent to me by the publisher, Candlewick Press

*Chelsea Pensioners - according to Wikipedia, they are soldiers who are residents of the Royal Hospital Chelsea, a retirement home for former members of the British Army.