Jazz Owls: A Novel About the Zoot Suit Riots by Margarita Engle, art by Rudy Gutierrez 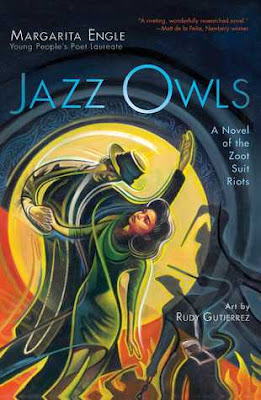 It's 1942 in Los Angeles, California. America hasn't been in World War II very long, but already the country is doing maximum war effort work. And that includes Mexican American sisters Marisela, 16, and Lorena, 14, who work long, exhausting days in a cannery, canning fruits and vegetables that will be sent to the armed forces overseas. But when night comes, the sisters are escorted to the local USO by their younger brother Ray, 12, to dance the night away with navy recruits on leave before they ship out to fight in the Pacific. Oldest brother Nicolás is off fighting somewhere in the where.

Rau may only be 12, but he already identifies as a zoot suiter, wearing the large jacket and loose pants, he calls drapes, that are their signature style and giving dancers plenty of room for dancing the jitterbugging and lindy hop. One night, after dropping his sisters off at the USO, Ray heads to a private party at a place called the Williams Ranch. A fight breaks out there and some members from "the 38th Street gang" leave but later return to get revenge. Ray is beaten up pretty badly, and another teen named José Díaz is found with stab wounds, and dies the next day. Ray is arrested along with members of the gang.

Reporters slant the story about the so-called "Mexican Problem" and the zoot suiters in such a way that they influence their readers against them for being unpatriotic. First, because they are Mexican, and second, they feel the large amount of fabric in a zoot suit is a waste and should be used for the war effort instead. Eventually released, Ray and the other zoot suiters are now seen by police, reporters, and civilians as baby gangsters.

Meanwhile, Marisela meets an Afro Cuban musician named Manolito and the two fall in love and want to get married, but California's anti-miscegenation laws of 1941 prohibit them from doing that. Ironically, Marisela, though of Mexican descent and hated by whites for that, is still considered "white" under this law, and can even marry a white person, but not a person of African descent.

Tensions increase over the next 10 months, during which time the family learns that Nicolás is now Missing in Action. The trial for the murder of José Díaz also concludes with a conviction of "a bunch of Mexican kids" sent to San Quentin for life.

The convictions only serve to outrage the white sailors nearby, and one night they go on a rampage, terrorizing Mexican Americans, publicly beating and stripping any zoot suiters they find of their drapes and burning them, including Ray. Even though the police see what is happening, they do nothing to stop it, ultimately arresting a hundred kids and only two sailors.

Angry at the pervasive discrimination they experience and the unimaginable violence they witness against the Mexican American community, and the poor working conditions at the canneries and factories they employ them, especially when so many have family members fighting in a war for freedom, the Zoot Suit Riots have a profound impact on the future of all three siblings.

Jazz Owls tells the story of a not very well known part of American history. is a novel told in free verse. It is told mainly in the voices of Marisela, Lorena, and Ray, and to a lesser extent, by their Papá, Mami, Abuela, different reporters, sailors, police, and even the spirit of José Díaz. It sounds confusing, particularly since this is a relatively small volume, but each is realized to the extent that they need to be and plays a pivotal part in the narrative.

Jazz Owls is a work of historical fiction based on real events and gives readers a window into the lives of patriotic Mexican Americans living in California during World War II. By interrupting and interrogating the predominate narrative in much the same way that books about the lives of African Americans, Japanese Americans, and Chinese Americans do, it draws attention not only to the roles they played in helping to win the war, but also the unmitigated bigotry they were made to deal with on a daily basis.

Ray calls zoot suits drapes, and whenever I look at Rudy Gutierrez' incredibly expressive illustration on the cover of Jazz Owls I can see exactly what he means, it is sheer drape and one of the most striking covers I've seen in a long time.

Jazz Owls is a much needed addition to the body literature about WWII historical fiction based on a real event, and I believe today's readers may be surprised at how much the story of a Mexican American family and the racial hate they faced that led to the Zoot Suit Riots will most certainly resonate with them.