The Length of a String by Elissa Brent Weissman 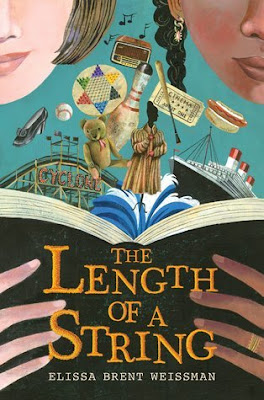 Twelve-year-old Imani Mandel was told she could have anything she wanted as her Bat Mitzvah gift. And she knows just what she wants, but she's too afraid to ask for it. Imani was adopted and now she is wondering about her biological parents and wants to know who she is and who they are. It's especially important to her since she is a young black girl and her parents are a white Jewish couple, albeit very loving parents.

As part of their Bat Mitzvah preparations, everyone in Imani's hebrew school class must do a Holocaust project, an assignment she has found to be pretty uninspiring. That is until she finds the diary.

Imani knew her great grandmother Anna has come to America from Luxembourg when she was young, but when the Rabbi at her funeral mentions something about her new family, Imani begins to wonder if Anna had also been adopted. Later, Imani is told that Anna had left all her books to her, her younger brother Jaime, and a younger cousin, Isabel. While sorting through the books, Imani finds the diary that Anna begun on the ship to the United States in August 1941 (and which she had conveniently translated the Luxembourgish entries into English in 1950).

As she reads the diary, Imani learns about Anna's life with her twin Belle, her parents, older brother Kurt, and young siblings, Mina, Greta and Oliver, about life in Nazi-occupied Luxembourg, and, despite have sponsors in the US, about how they were forced to make a last minute when the passeur* suddenly jacked up the cost of false papers and passage, allowing only one person to travel to New York and safety instead of two.

Anna was taken in by a couple, Max and Hannah, living in Bensonhurst, Brooklyn. Max was a furrier, working in the garment district for his two uncles, who has escaped the Russian pogroms as young men. Anna's first friend is a boy named Freddy, who helps her pick up English pretty quickly, teaches her the kind of street games played by kids, and even introduces her to the Coney Island Cyclone. Anna records all of this in her diary hoping to share it with Belle if and when she and the rest of her family arrive in NY. Sadly, Imani already knows that Anna's family has perished in the Holocaust, making her yearning all the more poignant.

As Imani reads her diary, she decides to make Luxembourg during the Holocaust her hebrew school project with the help of Anna's diary. Using Anna's story as a way to speak to her own parents about finding out who she is seems like a good idea, but she is still too scared to talk to her parents about it. It takes a surprising discovery for Imani to finally open up about what she wants.

In the end, both Anna and Imani have to learn that their identity is not necessarily jsut a matter of a biological connection, as much as it is feeling a deep connected to one's family, traditions, and history. A word about the title: it is the answer to the question how long is a piece of string? and length is unknown, variable or infinite. Here, the Anna and Imani's connection to their families is unmeasurable.

This was an interesting story about identity, though I felt that a little more about Imani being black could have been included with the same conclusion. Her Jewish roots were definitely privileged over her African American roots and I couldn't help but wonder what Imani sees when she looks in the mirror.  Deep down inside, I also felt that, in real life, this would be an issue that will return in Imani's future.

I have to agree with Ms. Yingling when she says she wished the book had followed Anna's story and Imani's had been it's own story. Both would have felt richer and more full-bodied then combining them. I did want to know more about Anna's family in Luxembourg. Did they ever receive the package that Anna and Hannah sent to them? Were they really forced into the Lodz Ghetto, as the people in shul speculated?

And I wanted to know why Imani was given up for adoption. And why her adoptive mother kept the name her biological mother gave her. Weissman writes they both mean Faith, but I would have expected her Jewish mother to change it to Faith, but she didn't.

I did like the fact that Weissman included enough about Imani's life so that the reader knows she is also just a kid on the verge of becoming a teen. There are tennis games (Imani is quite a good player), a best friend, other friends, parties, boys, crushes, and all the usual interests of a girl who is 12 going on 13.

While some things make this novel feel a bit incomplete, which is too bad, I still think it is an important book about adoption and family and definitely recommend it to young readers.

*A passeur was a person who smuggled people out of Nazi-occupied territories. They were often resistance fighters who escorted down pilots to safety, as well as Jews. Here, the impression is that the passeur isn't a very honorable person. Though some passeurs were heroes, after the war, there were also charges that some has profited from the desperation of the people they were helping to escape.
Posted by Alex at 12:27 PM