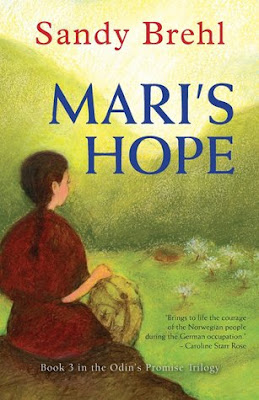 Mari’s Hope is the third book in the Odin’s Promise Trilogy. In the first book, In Odin’s Promise, Mari is only 11 when the Nazi’s invade her beloved Norway on April 9, 1941. Life as she knew changes overnight, and slowly, she learns that the Norwegians in her village and all over Norway are not taking the invasion and occupying German solders lying down - an active and successful resistance springs up almost immediately and by the end of the novel, after suffering a heartbreaking loss, Mari herself is part of the resistance.

Book Two, Bjorn’s Gift, begins in August 1941. When German officers move into their home, Mari's family move in with her grandmother in order to continue their resistance work, even risking sheltering refugees in the attic. Bjorn is away, now a full time part of the resistance, and Mari decides to secretly record everything that is happening at home for him to read after the war. Mari is also disappointed when she learns her old friend Leif and his family seem to have become collaborators.

Mari’s Hope begins in February 1943. Mari is now 14 years old and while still part of the resistance, she has also become a highly regarded assistant to Dr. Olsen, often visiting the sick in their  isolated homes spread out on the mountainside around her village of Ytre Arna. Food, fuel to heat homes, and a shortage of medical supplies have caused major problems for the folks who refuse to help the Nazis, including Mari’s family.

Mari is also able to travel to Bergen, to visit her sister Lise, a nurse, and to take her examinations to become a health aide. There, she meets Hanna, a smart, lively, not easily scared 8 year-old, and her friend Rolf, 14. But on her second meeting with Rolf, Mari and Hanna find him suffering serious injuries after some Norwegian Hitler Youth beat him up, and Mari ends up performing resistance tasks for him in Bergen before returning home.

Mari soon finds herself traveling again to Bergen. This time it is to try to get some needed medical supplies, using a clever ruse concocted by Dr. Olsen and a friend of his in Bergen. She goes a third time to Bergen to try to help out after a harbor explosion destroys much of the area in April 1944, and  to find Hanna and her older sister Julia, fearing that they may have perished in the intense fires.

At home, Mari is still having difficulties with her old friend Leif and his collaboration with the Nazis, and of course, there is still the despised German officer Klein, whom Mari had nicknamed Goatman in Odin’s Promise, an alcoholic who is known for his excellent ability to trace illegal radios, one of which is owned by Mari's family.

Brehl’s realistic depiction of life under the Nazis, of the way spontaneous resistance groups formed, of the fears, the deprivations, and even some of the happy times is probably the strongest appeal the Odin’s Promise Trilogy has for me. Authenticity in historical fiction is important, and I felt that Brehl had really nailed it, and yes, the terrible explosion in Bergen really did happen.

One of the other things I really liked about each book in the Trilogy is the consistent message that each of us can make a difference under difficult circumstances if we work together, and Mari’s family is the perfect example of that idea. Resistance is a theme that really means a lot to me and I found the large and small acts in Odin’s Promise, Bjorn’s Gift, and Mari’s Hope gave me some hope that something as odious as the Third Reich can be overcome.

Mari’s Hope takes the reader up to and just beyond the end of the war, and while there is some heartbreak in this novel, there are some nice surprises as well. And Brehl ties things up with a satisfying conclusion so there are no hanging ends. Much to her credit for creating such appealing, realistic characters, I did find that I was somewhat sad to close the book at the end of Mari’s Hope after traveling along on her wartime journey these past few years.

The Odin’s Promise Trilogy are three books that will appeal to anyone interested in WWII, the Norwegian resistance, and themes about family, friends, and life on the home-front in a war.

About the Author: Sandy Brehl is the award-winning author of a Norway historical trilogy for ages ten-thru-adult. (ODIN’S PROMISE, BJORN’S GIFT, and MARI’S HOPE) She also writes a blog about picture books (http://Unpackingpicturebookpower.blogspot.com) and contributes to a blog about historical works from middle grade readers (https://thestoriedpast.org). She’s an active member and volunteer with SCBWI-Wisconsin. Sandy writes fiction, nonfiction, and poetry for young readers of any age. A retired educator living in the Milwaukee area, Sandy offers programs for schools, libraries, and adult groups.