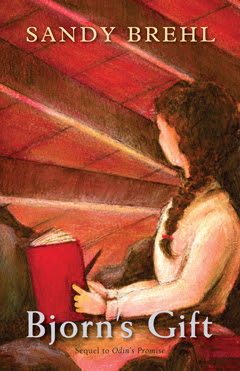 Bjorn's Gift is a sequel to Odin's Promise (my review) and continues the story of Mari, now 12, and her family living in Norway under Nazi occupation since it was invaded in April 1940.

Bjorn's Gift begins in August 1941.  Mari is still mourning the loss of her beloved dog Odin, killed by a Nazi trying to protect her, her older brother Bjorn is in hiding, working with the Norwegian resistance, and older sister Lise lives in Oslo with her new husband.  As the number of Germans occupying Mari's village increases, so do their demands to be supplied with whatever they want, leaving everyone else cold and hungry all the time and making life generally very difficult for all Norwegians.

Mari still wonders what she can do to resist the Nazis like Bjorn, so when her friend Per tells her that Bjorn asked him to keep a coded journal of happenings in their village, Mari feels a pang of jealously. But when Per asks her to take over the task, she refuses and instead begins to record events in her own notebook for Bjorn.  Mari is hoping to be able to live up to her brother's faith in her, especially as she begins to get involved in more dangerous resistance activities.

And it seems that once school begins, things get even worse.  Mari's old school friend Leif appears to have become a staunch Nazi supporter, counting the days until he is 14, and can officially join the Unghird, the Norwegian version of the Hitler Youth, who are, as far as Mari is concerned, a bunch of bullies. Added to that, now Leif's aunt and uncle, also Nazi supporters, have moved into the house across the way, a house left vacant after the Jewish owner, Mr. Meier, was beaten and taken away by the Gestapo. And it seems that Leif is there all the time, or rather, he seems to always be where Mari is, trying to convince her he is still her friend.

When the Germans start to increase the number of soldiers throughout Norway, Mari and her family decide move into her grandmother's small cottage for some privacy.  The soldier's living in their house expect her mother and grandmother, and Mari when possible, to cook and clean for them. In return, the family gets more ration cards and leftovers, which they share with those less fortunate.

Throughout the novel, Mari worries about her brother and how he is surviving the harsh winters in hiding, wishing she knew if he is actually still alive.  But he continues to serve as Mari's strength and inspiration, even as she begins to realize that the war and occupation are going to go on for longer that she had first believed.  If only she knew about Bjorn, it would be so much easier.

Bjorn's Gift is a powerful look at the life of one family on the home front when it is governed by an occupying enemy.  It is told from Mari's point of view in the third person, except for the journals entries, which are told in the first person and really move the story along nicely.  The journal entries are a chance for Mari to express her anger, her fears and even her hopes.

The novel takes place from August 1941 to New Year 1943 and the reader sees Mari as she continues to grow and mature, going from a still questioning, 12 year-old to a more self-assured 14 year-old, and gaining more of her family's trust.

But, as Sandy Brehl clearly demonstrates in both Odin's Promise and Bjorn's Gift, living under Nazi occupation makes Mari, her family and friends more determined than ever to keep a firm hold on their Norwegian identity, their values as a family, and their role as kind, caring, and concerned neighbors,  To their credit, Mari and her family never waver in their concept of who they is, and Mari especially feels not temptation to follow Leif in his support of the Nazis, no matter how much he pressures her.

Brehl's setting, Ytre Arna, is ideal for some of the resistance activity that occurs in Bjorn's Gift.  It is a real place, located on a fjord on the western side of Norway, and Brehl's descriptions of the beautiful landscape and the village certainly do it justice (though I suspect it is not longer considered to be a village).
Often a sequel falls a little short of a first novel that was thoroughly enjoyed, but let me assure you that that is not the case here.  Bjorn's Gift is fresh and exciting and works well as a stand alone novel, with enough information about the events in Odin's Promise that the reader won't get lost, though I would definitely recommend reading both, particularly since I have just read that there will be a third book, called Mari's Hope.  This is good since Bjorn's Gift really left me wondering what what was going to happen next.

Bjorn's Gift is a novel about family, friends, and courage and should appeal to young readers whether or not they have a serious interest in World War II.

About the Author: Sandy Brehl is a retired educator and active member of SCBWI (Society of Children’s Book Writers and Illustrators). When she’s not reading and writing, she enjoys gardening. She lives in the Milwaukee area and invites you to visit her website (www.SandyBrehl.com) to learn more about ODIN’S PROMISE and BJORN’S GIFT. Sign up for quarterly newsletters to stay informed about future releases (including MARI’S HOPE), and special events and offers.


Be sure to visit all the other stops on the Bjorn's Gift Blog Tour: