The Peace Tree from Hiroshima: The Little Bonsai with a Big Story by Sandra Moore, illustrated by Kazumi Wilds 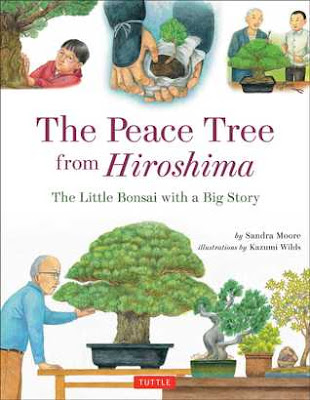 This is the story of a bonsai tree that was lovingly dug up on the island of Miyajima almost 400 years ago by a man name Itaro Yamaki, as a souvenir of the trees that had touched his heart on that beautiful, lush island.

Itaro cared for the bonsai for over fifty years, passing it on to his son Wajiro when he could not longer care for it. And so generation after generation of the Yamaki fathers and sons passed on the care and careful sculpting of Miyajima, as Itaro has originally named it.

Miyajima thrived year after year, even after the Yamakis moved to Hiroshima. But on August 6, 1945, an atomic bomb was dropped that decimated the city and killed many of its citizens. The Yamakis and Miyajima both survived, and eventually Hiroshima was rebuilt as the population again began to grow.

When the United States was celebrating it bicentennial in 1976, it was decided that Miyajima would be sent as a gift from the Japanese people to the American people in the hope that they would always live together in peace. And so the resilient Miyajima became known as the tree of peace, and given a place of honor in the National Arboretum in Washington DC.

This is an interesting fictional autobiography of a single bonsai tree. It is written in the first person from the tree’s perspective, which often doesn’t work but does here. Miyajima tells its story in simple, straightforward narrative. But it is Kazumi Wilds illustrations that really bring Miyajima’s story home. Her soft, gentle illustrations of almost 400 years of careful tending of the bonsai tree are done in a palette of bright greens, bright blues and beige against an essentially white background contrast sharply with the pages of grays and browns depicting the dropping of the atomic bomb on Hiroshima and destruction it caused. I personally found these illustrations to be as effective than the accompanying text, and may generate a strong emotional response from readers, just as they did from me. It so simply yet clearly demonstrates what happened that terrible day.

The Peace Tree from Hiroshima is an excellent picture book for older readers introducing kids to this particular aspect of World War II and its aftermath. This is Moore’s debut children’s book and she has written a very poignant story with age appropriate themes of friendship, resilience, war, and peace. Moore has also included a glossary, and facts about the different kinds of bonsai, much of which I did not know before I read it.

Be sure to read the Author’s Note at the back to this book. Some facts were altered for the sake of the story, and the Note explains what really happened and why.

2017 is the 72nd anniversary of the bombing of Hiroshima (August 6, 1945) and Nagasaki (August 9, 1945). What better time to read The Peace Tree from Hiroshima, especially now, when talk of using nuclear bombs is being threatened by some of the world’s leaders.


If you are ever in Washington, DC, you can visit Miyajima at the National Arboretum: 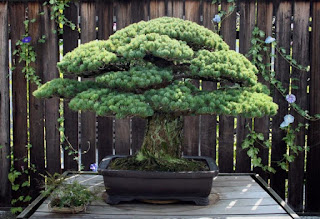 This book is recommended for readers age 8+
This book was purchased for my personal library
Posted by Alex at 11:26 AM