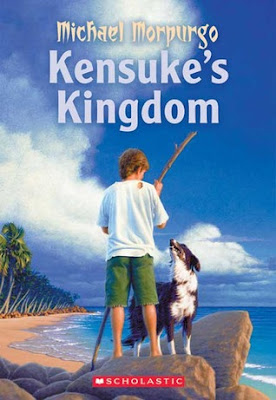 It’s 1988 and Michael, 11, is a pretty content kid until the day a letter arrives laying off both of his parents. After that, a “creeping misery” settled over the house, until the day Michael’s dad heads south to seek new opportunities. New opportunities are a total surprise to Michael and his mother when they arrived somewhere near Southhampton and discover his dad has bought a bought and has plans for the family to sail around the world.

And sail they do, even bringing along Stella Artois, the family dog. All goes well, with lots of interesting stops, until they are sailing away from Australia and through the Coral Sea heading to Papua New Guinea. It is there, on July 28, 1988 that they hit bad weather, and Michael, at the wheel in the cockpit, sees Stella go overboard. Trying to rescue her, he also goes overboard. Luckily so does his soccer ball, which gives him some buoyancy.

The next morning, Michael wakes up on an island beach with Stella and no idea how he got there. It turns out the island is a jungle with a thriving wild life. After exploring all day, a hungry, thirsty Michael and Stella retreat to the shelter of a cave to spend the night as a castaway.

The next morning, and every morning after that, Michael and Stella wake up and find fresh water and carefully prepared raw fish waiting for them. Knowing he isn’t alone, Michael finally meets his benefactor while trying to build a large enough fire to be seen by a passing boat. Instead, it is seen by an elderly Japanese man, Michael’s benefactor, who quickly puts the fire out. The two get off to a rocky start, but eventually they become friends, and Kensuke, Michael learns, has been living on the island since WWII.

Kensuke teaches Michael how to fish, cook, and even paint using ink from the octopi they catch and in return, Michael teaches him English. Kensuke, who had been a doctor in Japan, begins to tell Michael about his happy life in Nagasaki before the war, about his wife Kimi, and his son, Michiya. When war came, Kensuke joined the Japanese Navy as a doctor, and was the sole survivor of an attack on his ship. Later, overhearing some Americans talking about the bomb that was dropped on Nagasaki, killing everyone, Kensuke decided to remain on the island after the war had ended.

Eventually, he realizes that Michael belongs with his family, and agrees to let him build a fire to attract a passing ship, and even agrees to leave the island, too, should a ship actually show up.

In the end, when rescue is about to happen, Kensuke chooses to remain on the island, but asks Michael not to talk about him for at least 10 years, which he does. After writing a book about his adventure with Kensuke, Michael receives a very surprising unexpected letter from Japan.

I have to admit, even though I doubted Michael and Stella would survive in a stormy ocean at night, I willingly suspended my disbelief and let myself enjoy this intergenerational story about an unusual friendship. I did find the beginning a little slow, thinking I could have lived without a lot of the descriptions about life in London, but once Michael and Stella were on the island, my interest, the excitement and the pace soon picked up its pace. I found myself very curious about Kensuke but Morpurgo delayed his story until just the right moment.

Kensuke’s Kingdom did remind me of Theodore Taylor’s book The Cay, but without the kind of racial tension that existed at first between white Phillip and West Indian Timothy, and which actually did take place during WWII. Still, pairing these two books together would result in an interesting take on intergenerational, biracial friendships under stressful conditions (which is often when we discover the most about ourselves).

I don’t know if it’s me, but whenever I read a book by Michael Morpurgo (and I’ve read a lot of them), I find myself being lulled into the story, and I don’t mean that in a negative way. It is actually almost hypnotic  and I think the reason why not only is disbelief suspendible, but it makes the story more real and enjoyable, even the sad bits. And, interestingly, I find I always pick a Morpurgo book whenever I’m in a nostalgic mood.

And, yes, I found myself reaching for the tissues as I finished reading Kensuke’s Kingdom, so be warned.

Teaching Ideas has some really nice teaching ideas to use with Kensuke's Kingdom and you can also find some nice downloadable teaching resources and activities from Michael Morpurgo's website.

This book is recommended for readers age 9+
This book was purchased for my personal library
Posted by Alex at 12:47 PM