A Year of Borrowed Men by Michelle Barker, illustrated by Renné Benoit 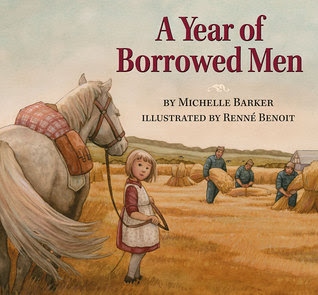 I think that we sometimes think that if a person was German in the 1930s and early 1940s that automatically makes them Nazis. But the truth is that there were plenty of decent people who were not Nazis, didn't support Hitler and his Third Reich, and were just struggling to survive like anyone caught in a war.

A Year of Borrowed Men is just such a book. This fictionalized story that takes place during the last year of the war is based on the author's mother's actual experiences as she related them to her children. Farms and the food they produced were just as important to Germany during the war as they were everywhere else, but with all the men off fighting for the Führer, many farms were struggling to survive.

For Gerda Schlottke, 7, and her family living on a farm in a rural part of Germany, taking care of all the farm chores was getting difficult with her father off fighting in the Germany army. They had a good sized farm consisting of cows, pigs, 150 chickens and 6 horses that needed to be cared for everyday, as well as field work to be done and only 5 young children. To assist families like the Schlottkes, the German government decided to use POWs to help with the farm work. The German government sent them three French POWs - gentle Gabriel, prickly Fermaine, and cheerful Albert. The men lived in the cold, bear pig kitchen, next to where the animals slept. Families were not supposed to be kind to them, or to feed them or treat they like a member of the family, but for some people that was hard not to do.

One cold day, Gerda's mother invited the men into their warm kitchen to eat with the family. The next day, there was a knock on the door and Frau Schlottke was taken to police headquarters by a formerly kind neighbor who had joined the Nazis and warned not never to be kind to her workers again or she would find herself in prison.

Over the year that they 'borrowed' the French POWs, the Schlottke family found ways to counter the admonishment they were given regarding the treatment of Nazi Germany's enemies. For example, at Christmas, the men were allowed a tree, but no decorations, they were allowed to receive parcels, but no food from the Gerda's family, and yet they managed to find a way around that. It is interesting to see just how they could make the time somewhat bearable for Gabriel, Fermaine, and Albert and A Year of Borrowed Men is a nice reminder that there were at least a few pockets of humanity still to be found in what was an otherwise brutal regime.

At the end of the European war in the spring of 1945, the men left the farm and eventually returned to France. Meanwhile, the Russian army arrived, "liberating" all the farm animals, including those of the Schlottkes.

A Year of Borrowed Men is a gentle story, poignant in its hopeful perspective, perhaps because it is narrated by 7 year old Gerda, and Michelle Barker is able to retain all the the innocence of a child in her writing. A cruel, hateful regime and war, after all, doesn't mean one needs to sacrifice their humanity, as so many did living under Hitler and during WWII. Although the story covers the year the POWs were at the Schlottke's farm, because of the number of pages devoted to Christmas, it makes a nice holiday story, as well. There may not have been Peace of Earth at that time, but at least on one farm there was Goodwill towards men.

Renné Benoit's watercolor, pencil and pastel illustrations has a gentle, almost folk art feeling to them, done in a palette of warms browns, greens, and ochre earthtones that seems to create a haven in the midst of war.