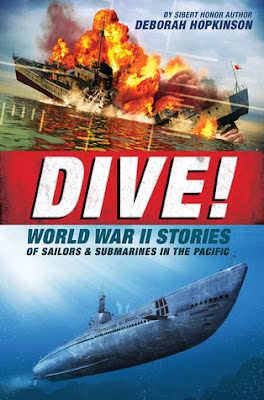 When most of us think about World War II, we generally focus on the European Theater.  Hitler, the Gestapo and the Nazis seem to be the predominant focus of books for kids and adults in both fiction and nonfiction.

But there are excellent, well-researched books that also turn their attention to the Pacific Theater and the war with Japan that began on December 7, 1941, when the Japanese attacked and decimated America's naval base in Pearl Harbor.  It truly was a day, as President Roosevelt said, "that will live in infamy."

And that is the day that Deborah Hopkinson begins her fascinating look at the important role that the Submarines, Asiatic Fleet played in the war, a fleet that was by no means war ready.  She begins by introducing the reader to 15 year-old sailor Martin Matthews on leave and visiting a friend aboard the USS Arizona. Martin survived the attack, and although he could have revealed his age (yes, he, like many others, lied about it) and gotten out of the Navy and the war, he stayed, "because it was my country" under attack.

Making it clear that the goal of the Japanese was to achieve dominance in the entire Pacific region, Hopkinson turns her attention to four submarines, USS Seawolf, USS Trigger, USS Wahoo, and USS Tang.  Presenting them in chronicle order, and using first-person recollections combined with other source, she follows the sequence of events as each submarine faced them, focusing on the problems the faced, such as torpedoes that were defective, tracking battleships using only sound and not knowing if they were friend or foe, on the camaraderie among the submariners, and their amazing accomplishments from the mess chefs on up to the commanders.

Hopkinson makes her history of the submarine in the Pacific Theater fresh, in part because of the personal narratives included, and exciting, putting the readers into a submarine during war, giving them a real sense of the tension while out on patrol, looking for enemy ships, and especially the close quarters the submariners lived in, sometimes not seeing daylight for very long periods of time.

To her credit, Hopkinson has also made this story of sailors and submarines a reader-friendly work. Technical terms, fighting strategies, battles fought and either won or lost are all written clearly and understandably, ideal for young readers who have an interest in WWII, and/or submarines.

Interspersed among the narrative are what she calls breakouts: sidebars that give additional information; briefings that provide analysis and background information; dispatches that are stories of interest or additional first-person accounts; and submarine school focusing on submarines or life as a submariner.  I found all of these breakouts interesting and informative and fit right in with submarine life.  In addition, there is quite a bit of back matter, from timelines, to a glossary, maps, diagrams, bibliography, and excellent source notes.

Dive! is a book I can highly recommend to all readers.

This book is recommended for readers age 9+
This book was sent to me by the publisher, Scholastic Press

Be sure to visit the other stops on the Dive! Blog Tour: