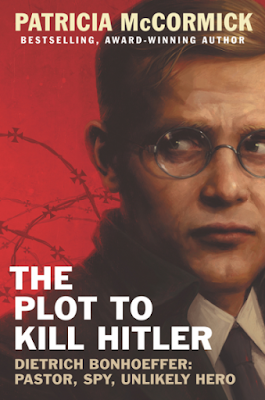 The fact is that most people don't really know who Dietrich Bonhoeffer was or, if they know the name, they aren't sure of what he did beyond opposing the Nazis.  To be honest, beyond using a few quotes for papers I have written (my favorite The ultimate test of a moral society is the kind of world it leaves to its children) and knowing why he died young in a German concentration camp, I didn't know that much about his entire life either.

But, in the history of the Third Reich, Dietrich Bonhoeffer is an interesting figure.  A deeply religious man and a pacifist, one has to wonder how did a man who came from a large, well-to-do, well-educated family end up being executed by hanging at the age of 39 for his involvement in a plot to kill Hitler?  In her new book, The Plot to Kill Hitler, Patricia McCormick explores that very question.

The youngest of eight children, all accomplished, Dietrich wanted to achieve something all his own. Invited to study at a music conservatory, he had already decided to study theology and become a minister, beginning his studies in 1923.

Slowly, as Hitler became more and more popular, Dietrich formulated his own ideas about the church.  Ultimately, he came to believe that the church shouldn't be an authoritarian force in people's lives, but rather it should be a "force for good," that it should be "deeply and directly involved in the problems facing ordinary people." (pg 27)

Over time, Dietrich would come under the influence of people who felt as he did, and he would learn much from people like Frank Fisher, with whom he became friends while studying in 1930 at Union Theological Seminary in NYC.  Fisher introduced Dietrich to the reality of life for African Americans in Harlem, even taking him to the Abyssinian Baptist Church, where Dietrich ended up teaching Sunday School for a while.  Another influence at that time was Rabbi Stephen Wise, who sensitized him to what was happening to Jews in Germany because of Hitler's anti-Semitism rhetoric.

Returning to Germany, Dietrich refused to pledge his support for Hitler's new church, the Reichkirche, a church that replaced God with Hitler as it head.  Eventually, as things in Germany worsened, Dietrich's siblings and and brothers-in-law drew him into a plot to kill Hitler.  But Dietrich was a pacifist, even wanting to study under Gandhi in India, so how could he possibly justify an assassination of another human being, even one as dangerous as Hitler?

Dietrich's answer was simple and may surprised young readers of this very well-done biography.  The book begins with Cast of Characters, always a good idea when writing about people that are probably not familiar to readers, but whom they will no doubt find fascinating.

And even though the Cast of Characters tells the readers the fate of these participants in the plot to kill Hitler, McCormick has written in such a way that it maintains a tension throughout and even knowing the outcome assassination attempt, makes you hope against hope it will come out differently.

McCormick includes copious photographs, occasional offsets to give more information about certain people or concepts that may need a little more explanation, and the is lots of informative back matter. This includes an Author's Note, a extensive Timeline, Endnotes (always important), and a Selected Bibliography,

I found The Plot to Kill Hitler to be a very inspiring book, not because it was full of grime detail about the planning to pull off an assassination attempt, but because it was full of ideas and the development of Dietrich Bonhoeffer's thinking.  Like Bonhoeffer, I am also a pacifist and I have often wondered what I would do if I found myself in the kind of situation he found himself in. Interestingly, I did find at least part of an answer in The Plot to Kill Hitler.

This book is recommended for readers age 9+
This book is an ARC received from the publisher.
Posted by Alex at 9:15 AM