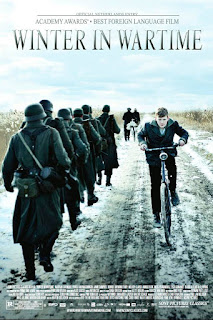 Way back on November 1, 2011, I reviewed a book called Winter in Wartime by Jan Terlouw (my review).  I found the book to be a compelling coming of age story about a 15 year-old Dutch boy named Michiel who becomes involves with the resistance movement there quite inadvertently in the last year of the war.

Though the book was published in Dutch in 1972, it wasn't until 1978 that an English language translation of it was available. Then, in 2008, a film version of the book was released in Holland. The film was directed by Martin Koolhoven, done in Dutch, English, and German and starred a young Dutch actor named Martijn Lakemeier.

At the time I wrote my review, I mentioned that a movie had been made from the book Winter in Wartime.  I also said that I had heard that the movie wasn't very good.  On January 4, 2013, a comment was left on my review in which the commenter said they had seen the movie and it was actually quite excellent.  On August 8, 2016, another comment was left that seconded the comment left in 2013 about the excellence of the film version of Winter in Wartime.

Well, I finally was able to watch the movie on Netflix thanks to my allergies and asthma which has sidelined for the last two weeks.

And I have to say that my two commenters were absolutely correct to say Winter in Wartime is an exceptional film. In fact, it has even won a number of awards, mostly European, although it was shortlisted for Best Foreign Language Film at the 2009 Academy Awards.

And while I do recommend this film to anyone interested in World War II, this is not a movie for young viewers.  Among other themes, it is a story of loss and betrayal, and there are some raw scenes that are simply not meant for everyone, which is why it received an R rating.


What did I learn from all this?  Judge for yourself.