Your Hit Parade #6: Thanks for Dropping In, Mr Hess 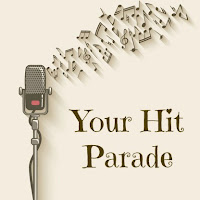 I had to chuckle to myself when I was reading These Dark Wings by John Owen Theobald and the protagonist Anna Cooper, 12, runs into a fellow named Rudolf Hess on the grounds of the Tower of London during WWII.  He was a prisoner in the Tower for a few days and I don’t know if he would have been allowed to walk around the grounds or not, but it was very well guarded, so perhaps he could.  But who is Rudolf Hess and why was he in the Tower, in the first place?

Rudolf Hess was an old and loyal friend of Adolf Hitler’s and an original member of the Nazi Party, joining in 1920.  After the failed 1923 Beer Hall Putsch in Munich, Germany, in which the Nazis attempted to take over the Bavarian government, both Hitler and Hess were sent to jail.  It was while in prison that Hitler began Mein Kampf.  Hitler ranted and Hess wrote it all down.

Naturally, when  Hitler seized control of Germany in 1933, he rewarded his old pal Hess by making him the Deputy Führer, the third most powerful position in Nazi Germany, placing him right behind Hitler and Hermann Göring.

So it was a little surprising when Hess took it into his head to climb aboard a German Messerschmitt plane belonging to the Luftwaffe all by himself on the night of May 10, 1941 and fly to Scotland.  The weather was bad as Hess neared Scotland and he was forced to parachute out of his plane.  Both Hess and the plane crash landed in farmer David McLean's field.  Hess had hoped to meet with the Duke of Hamilton for the purpose of instituting peace talks, but instead, he soon found himself in a farmhouse kitchen having a cup of tea with the farmer’s wife before being arrested.  Hess’s problem was that no one in Germany or Great Britain knew anything about his so-called peace mission and in fact, to this day, it is still wondered at.
Having never met with the Duke of Hamilton, Hess was taken into custody and yes, Prime Minister Winston Churchill ordered him to be taken to the Tower of London.  He was only there for a short time, but Hess has the distinction of being the very last state prisoner ever held in the Tower.  He was later transferred to a fortified mansion in Surrey until after the war, when he was sent back to Germany.  There, he was tried as a war criminal in Nuremberg, receiving a life sentence.  He was sent to Spandau Prison, where he remained until his death in 1987 at age 93. 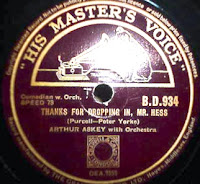 It didn’t take long for Hess’s arrival in Scotland to become fodder for British humor, after all, the British were fascinated with Hess’s flight into enemy territory.  And Arthur Askey, a well-known actor/comedian and a popular personality on BBC radio during the war, was just the person to capture the whole Hess incident with his perfect comedic timing.  In a song written by Harold Pucell, Askey recorded a tune originally called "It's Really Nice to See You, Mr. Hess" but later changed to "Thanks for Dropping In, Mr. Hess" for His Master’s Voice on their bargain BD label, just in time for the record company’s July 1941 releases.  Unfortunately, the British War Office wasn’t quite as amused as everyone else and demanded that the song be banned, afraid that it might be detrimental to morale of those serving in the Armed Forces.


So, it wasn’t until after the war that that “Thanks for Dropping in, Mr. Hess” surfaced again, in various collections of wartime songs.  I discovered it when I was putting together a playlist of humorous songs that were popular during WWII (and there were a lot).  I have never found sheet music for it, nor have I found the lyrics anywhere.  I copied the lyrics down while listening to the song to share with you (so if I'm wrong about any, please let me knew):

Welcome, little stranger, falling from the sky
Falling like the raindrops or the dew.
Are you out of danger? do you realize
Just what sort of welcome’s waiting you?

Well, thanks for dropping in, Mr. Hess,
We’ve told your friends to note your new address.
They’ve heard you got her safety in Berlin and in Rome,
So put away your parachute and make yourself at home.

Nice and unexpected, just the way we like,
Strolling in as friendly as can be.
Soon we’ll have  ol’ Adolf, jumping off his bike, calling in to have a cup of tea.
Thanks for dropping in, Mr. Hess,
We trust you haven’t left behind a mess.
Perhaps you thought that someone there had taken you for a ride,
Perhaps you thought it safer here than on the other side.

Email ThisBlogThis!Share to TwitterShare to FacebookShare to Pinterest
Labels: Music, Your Hit Parade