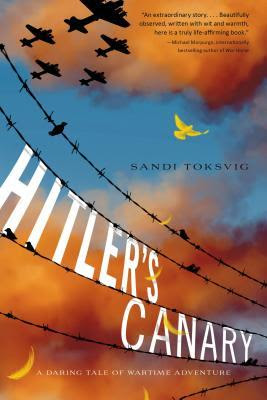 It's April 1940 and suddenly the sunny blue sky over Copenhagen, Denmark is dark with airplanes. The German Luftwaffe is dropping leaflets telling the Danes that the Germans have come to protect them from the evil British and French.

At first, life doesn't change much for Bamse, the 10 year old son of a famous stage actress and a set designer/painter father, or for his best friend Anton, also 10 and Jewish.  They keep their heads down and try to stay out of trouble.

But Bamse begins to notice his older brother's odd new behavior. Orlando refuses to be quiet and allow his country to be invaded and occupied, and he's especially angry that the Danes are being called Hitler's Canary in Britain, because they didn't fight back and now, they are just being quiet and docile towards the Germans.  It is particularly galling to Orlando, since Denmark was a country the believed in freedom and equality for all.

After letting Orlando know that they are aware of his activities, Bamse and Anton begin running resistance errands for him. At first, it all seems exciting and fun to the two young boys, but as time goes by, Nazi oppression begins to be felt more and more.  To make matters worse,  incidents against Jews increase.  Then Bamse's family is rocked when it is discovered that sister Masha has become romantically involved with a young German soldier, actually meeting him at night in the family garden.

To top that off, Uncle Johann arrives in Copenhagen, announcing he will be staying with the family, a situation that becomes awkward when they discover he is a Nazi sympathizer, thinking they are right about the Jews ruining everything in Denmark, despite evidence to the contrary.  Fear and occupation begin to feel real and scary for Bamse and Anton when they learn that Orlando has been arrested, along with the other resistance members.  Arriving at the dentist's office that also served the resistance, they find it has been ransacked by the Nazis, and everything in it confiscated.

Though Bamse's father had believed that the Nazis would never deport the Danish Jews if they all cooperated, in 1943, word leaks out that they do indeed plan on rounding up all of Denmark's Jews on Rosh Hashanah, figuring they will all be home for the Jewish New Year. Knowing that the Nazis are watching their apartment, Bamse's family and neighbors quickly mobilize to hide Anton and his family, plus a few more Jews who are in their apartment.

We do know that Denmark's approximately 7,800 Jews were almost all save, but will Bamse's friend Anton and his family make it out of their hiding place and to Sweden before the Nazis find them?

Hitler's Canary is a captivating novel that is based on the experiences of author's Danish family in World War II, which may be why it has such a strong feeling of reality despite being historical fiction. Told in the first person by Bamse (the character modeled on the author's father), he proves to be quite a lively narrator, easily detailing his exploits with Anton for the resistance with both gravity and humor.  He also details the way life was before the Nazis arrived in Denmark, so the reader can compare the changes under Nazi occupation. Denmark had long ago granted full emancipation to the Jews living there, and, for the most part, they lived quiet lives among friends and neighbors.  So when it came time to decide what to do when word came that the Nazis planned on rounding the Jews up, most Danes believed that preventing that from happening was just the right thing to do, and Bamse makes sure his readers understand that.

I had picked up Hitler's Canary a while ago and just couldn't get into it, so when I saw it in the library, I decided to give it another try and I am so glad I did.  The characters are all so wonderful. I loved Bamse's mother Marie.  She is such an eccentric person, drawing on lines from past plays she had acted in whenever the situation called for a response.  But when it counted, she came through, even if it cost her more than she could possibly imagine.  Bamse's father is more down to earth, though sometimes taking the path of least resistance, but in the end, he, too, really understands the seriousness of the Jewish situation and comes through.

At one point in the story, the boys from the Churchill Club are mentioned, and for anyone familiar with this resistance ground, it will add more of a sense of reality to the novel, reminding readers that all over Denmark, people were active underground in a effort to sabotage everything the Nazi's did in their country.

Hitler's Canary is a thought provoking novel about courage, loyalty, the importance of family and friends in difficult times, demonstrating that people can make a difference if they work together.

FYI: it was Winston Churchill who called the Danes "Hitler's pet canary" for not fighting back when the Nazis invaded their country, but in all fairness, the Danish were a peaceful people and their fighting forces were just not match for the Germans.  On the other hand, they had a great resistance movement that really drove the Nazis to distraction.
Posted by Alex at 11:49 AM