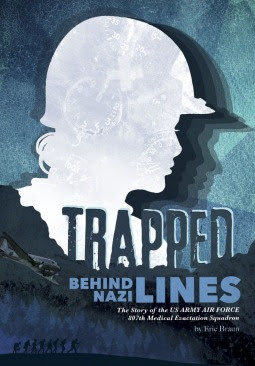 Here is a little known harrowing story of courage and survival that could rival any novel written about WWII.

On November 8, 1943, a group of 13 Army medics, 13 Army nurses and a flight crew of 4, most in their late teens and early twenties, set off from Sicily on a plane bound for Bari, Italy to pick up some wounded British soldiers.  Almost immediately, the plane ran into trouble as they flew into a cold, harsh winter storm.  As the plane bucked and dove over the sea below, one of the nurses realized there were only 10 life vests for 30 people.  Then the radio went out and communication was no longer possible with anyone anywhere on the ground.  The plane flew in circles and began to run out of fuel.  As they attempted a landing in a valley, the plane was greeted with antiaircraft artillery.  When they finally crash landed, it was cold and rainy, no one was dressed for the weather or even  knew where they were, and on top of that, men with rifles were running towards them shouting in a language they did not understand.

One of the men spoke a little English and told the Americans they were in Albania.  Luckily for them, the Albanians were anti-Nazi guerrilla fighters, unluckily for them, the area was surrounded by German soldiers.  Not knowing if they could trust these partisans, the Americans nevertheless decided to follow them through the woods, and after hiking for hours in the pouring rain, arrived at the village of Gjolen.  There, they were feed some dry cornbread and sour white cheese.

Thus began the harrowing 63 day journey to reach their destination at Bari, Italy.  In-between, the meds and nurses had to hike between 600 and 1,000 miles in bitter cold, snowy weather to reach the Albania coast only 60 miles away.  Along the way, they were at the mercy of the partisans, some who were honest and treated them as kindly as possible under the circumstances. some not terribly trustworthy and others just scared villagers who would put them up for a night, but wanted them gone the next day.  Everyone knew that If anyone in Albania was caught helping the Allies, they would be immediately killed by the Nazis and their villages burned down - and there was proof all around them that this threat was real.

Trapped Behind Nazi Lines is an exciting account of this rescue of the flight crew and the 26 medical personnel of the 807th.  I have to be honest and say that given the obstacles these men and woman encountered, drawbacks like starvation, inadequate clothing, worm out shoes, I am in awe that every single one of the survived their ordeal.

Eric Braun used various sources, including books written by one of the medics and one of the nurses, to recreate a vivid, detailed account of what life was like for the two months these soldiers were caught behind enemy lines.  One of the things that surprised me was that for a country occupied by Nazi soldiers, there were some British SOE agents there who were able to help the Americans escape. The other surprise was the age of the medics and nurses.  I kept having to remind myself that these were really collage-age kids and not seasoned soldiers, yet they acted and reacted like more mature adults given the dangerous situations they found themselves in.

Trapped Behind Nazi Lines is a work of nonfiction that is sure to appeal to middle grade reader, and even YA readers who like history, but will also please kids looking for an action-packed story, all the more  exciting because it really happened.

Back matter included lots of photographs of the Americans, a map, a timeline, select bibliography, internet sites and more.

This book is recommended for readers age 9+
This book was an EARC received from NetGalley
Posted by Alex at 10:11 AM