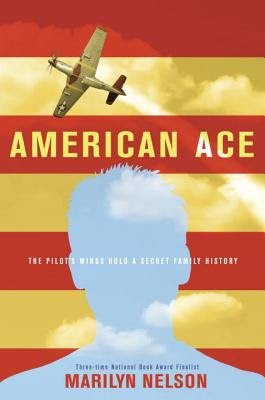 For Connor Bianchini, 16, much of his life has always revolved around his family and the family's restaurant, Mama Lucia's Home Cooking.  And he has always known exactly who is - half Irish on his mother's side of the family, half Italian on his father's.  But just before Nonna Lucia passed away, she gave Connor's father Tony a ring, some pilot's wings, and a letter explaining the her Italian husband was not his father.  His father was an American pilot named Ace, with whom she had an great love affair.

After his father gives him the gold ring, Connor begins thinking about the man who loved his grandmother so much.  The ring becomes a reminder for Connor to wonder who he is and it doesn't take long for him to start researching it to try to find his real grandfather's identity.  Engraved on the ring are the words The Forcean 1940 and the initials MS, providing a good place to start.

The rest of the Bianchini rally around Tony, providing family support and acceptance of his new half-brother status, but Tony has been thrown quite a loop.  With the help of a librarian at the local college, a book called The Forcean, which he thought might be related to the ring, was borrowed through inter-library loan.  When the book arrives, it turns out to be a college yearbook from Wilberforce University - one of the historically black colleges and universities (HBCU).

Already depressed over losing his mother and the family's matriarch, Tony has a stroke after finding out that his real father was African American.  While he is in the hospital recovering, Connor continues his investigations into his mysterious African American grandfather, and his grandmother great love.

Connor, unlike his half-brother Carlo, immediately embraces his new heritage and decides to write his senior honors paper on the Tuskegee Airmen after discovering that his grandfather had most likely been one, stationed in Italy at one point.

Nonna Lucia left quite a legacy for her family and it is interesting to see how the rest of the family handled it.  How would you have handled news that you are not who you think you are?

I have always loved Marilyn Nelson's stories in verse, but this one just didn't do it for me.  I would have much preferred a novel about the grandfather, and his experiences both before and after his time as a Tuskegee Airman in Italy and his affair with Nonna Lucia, how he might have dealt with issues around race and prejudice.  And while books about biracial families are so needed right now, the Bianchini's just felt too unreal for me, even Connor.

Much of the story revolves around Connor's driving lessons, first with his father and later his mother. Driving is, of course, a nice coming-of-age-entering-adulthood trope.  It is Connor who now becomes the caretaker, caring for his father much of the time after his stroke, helping him heal both physically and emotionally and enabling him to come to terms with his new identity with the information he has learned about Tuskegee Airmen for his honors paper.

The part of the book I really did like was the last sections in which we get to read Connor's paper, complete with photographs of actual Tuskegee Airmen, and the only indication of what Connor and his dad are doing in in the chapter heading and yet, it all worked.

Despite my objections, I still think this is a book that should be read by all.  And do read the Author's Note at the back of the novel, where Nelson explains how she came to write a novel from the perspective of a white teenage boy.