Conspiracy of Blood and Smoke by Anne Blankman 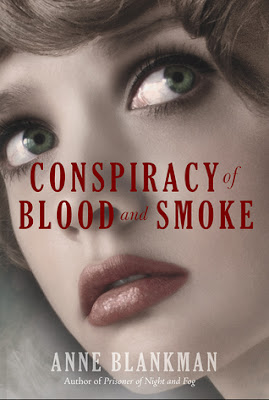 Conspiracy of Blood and Smoke is the sequel to a book I read and reviewed last year called Prisoner of Night and Fog.  I wasn't too crazy about that book, but I am pleased to say that I liked the sequel much more.

Prisoner of Night and Fog takes place in 1931 Munich, Germany.  Gretchen Müller, part to the inner circle of young girls in the Hitler entourage, has discovered that her father, a strong Hitler supporter, had been deliberately killed in the 1923 Munich Beer Hall Putsch by a fellow Nazi.  Gretchen is determined to solve mystery of who would have done such a thing with the help of Daniel Cohen, handsome reporter for the Munich Post.  It also didn't take long for Aryan Gretchen and Jewish Daniel to find they were very attracted to each other despite their differences. And yes, they solve they mystery together.

Conspiracy of Blood and Smoke picks up their story in 1933 England.  Forced to flee Germany after solving her father's murder, Gretchen is living in London with a loving family and going to school, and Daniel is working for the Oxford Mail, writing the society column.  But when Daniel receives a telegram that his cousin Aaron has been attacked by Nazis and is in critical condition, he immediately returns to Germany to get justice to his cousin.

On January 30, 1933 Hitler is named Chancellor by President Hindenburg.  One month later, February 27, there is a fire in the Reichstag, the seat of government.  Hitler blames the Communists for it, even though it has most likely been done by the Nazis for the purpose giving Hitler a strong reason for forcing the passage of the Enabling Act, a piece of legislation that would give him complete power, turning Germany into a Nazi dictatorship.

Then, when Gretchen receives a mysterious telegram telling her that Daniel is in trouble, that he is wanted for murder, and possibly dead, she decides to risk capture by the Nazis and returns to Germany to find him.  There, an old newspaper friend of Daniel's tells Gretchen that the Nazis claim Daniel has killed a young women named Monika Junge and that he had also been beaten and robbed of his money and false identity papers a few days ago, but no one has seen Daniel since.  Next, she calls her old friend Eva Braun and asks her to find out if Daniel has been arrested. Eva tells her no, but that Gretchen must get out of Munich, Hitler is still after her for what she uncovered about him while trying to find out who murdered her father.  Ironically, the murder of Monika Junge leads Gretchen and Daniel right back to the Reichstag fire in an unexpected way.

Gretchen gets on a train to Berlin, and (perhaps a little too conveniently) runs into Daniel.  The two travel together to Berlin and what follows in a exciting journey through Berlin's underbelly and her higher echelons of government as Gretchen and Daniel try to clear his name of the murder charge the Nazis have leveled against him before the passage of the Enabling Act.  Once the Enabling Act is passed, it will be impossible to solve the mystery surrounding Monika Junge's murder because anyone who could help would immediately be arrested (the Enabling Act passed on March 23, 1933).

Blankman used the Reichstag fire and the Enabling Act to create a real nail-biting story.  She also effectively mixes real people from that time with her fictional characters, though there is a fine line between what really may be and what she includes, case in point: what Monika Junge knows and why it is dangerous for a certain important Nazi is pure fabrication.  But she does do a great job of showing why the events she includes are so important in understanding Germany at that time.

But as much as this is an historical fiction mystery utilizing time, place, people and events quite well , it is also a romance novel.  Gretchen and Daniel are very much in love, and that's great.  It doesn't overwhelm the overall story too much, but I have to be honest and say that this romance has gone on since 1931, Gretchen and Daniel have found themselves sleeping together many times when their lives have been in danger and nothing intimate has happened.  It's even mentioned in Chapter 16.  I had to ask myself if this is realistic and I don't think it is, not even for those times.

Blankman also brings in another interesting element of reality to the story - he organized crime syndicate, the Ringvereine, which is something you don't hear about very often.  I've heard of it, but don't know that much about it, only that they did exist and were very protective of their own - and Monika Junge was one of their own.

My only objection to the novel was the end, but I don't want to resort to spoilers, especially not at the end of a story, so you'll just have to read it know what I mean.

Do read the Author's Note at the end to fully appreciate all the history incorporated into this novel, and Blankman's Selected Bibliography for further information.

This book is recommended for readers age 14+
This book was borrowed from the NYPL
Posted by Alex at 12:33 PM