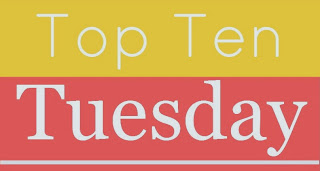 This is one of the first books I read when I began this blog and I liked it so much I bought a copy for my niece.  Mare and her granddaughters are taking a trip to a family reunion during summer vacation.  The girls are bored and unhappy, wanting to stay home with their friends instead.  As they drive along, Mare begins to tell them about her time in the Women's Army Corp or WACS in WWII.  Because Davis wove in so many historical facts about Mare's, the 6888th Central Postal Battalion, the readers learns a lot about what like was like for the women in this African American, all-female unit, the only one to serve overseas. (YA)

2- Climbing the Stairs by Padma Venkatraman

When I reviewed this book, I wrote that I knew almost nothing about the role India played in WWII.  In 1941, Vidya, 15, wants nothing more than to join Gandhi's Freedom Fighters.  Seeing a Freedom Fighters demonstration, Veda rushes to join it, but it results in her father being beaten by a British policeman, leaving him brain damages. Vidya keeps the details of what happened to herself, until her brother announces he is going to join the voluntary British India Army.  How could he fight for and defend the people who destroyed her beloved father's lie.  There is a lot of information in Vidya's story about Indian traditions and religion.  (YA) 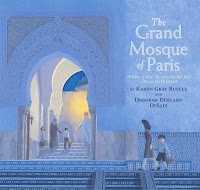 3- The Grand Mosque of Paris: A Story of How Muslims Rescured Jews during the Holocaust by Karen Gray Ruelle

The Grand Mosque had been given to the Islamic community in Paris in gratitude to the Muslims who fought in WWI.  In 1940, after France was invaded by the Nazis and began rounding up Jews for deportation, the members of the Grand Mosque, many of whom were in the French Resistance already, realized they had the means to help the French Jews and began sneaking them in the mosque until they had what they needed to escape.   (Picture Book for older Readers)

4- When My Name Was Keoko by Linda Sue Park

Although Korea had been occupied by the Japanese since 1910, once World War II began, things began to get even harder for the Korean people.  In this story about the Kim family, the reader learns through the alternating narration of Sun-hee, 10, and her older brother, Tai-yul, 13, how much of their culture was sacrificed including their Korean names and forcing them to accept Japanese culture and language.  Outwardly, the family accepts the Japanese demands, but at home the hold tightly to their Korean culture.  As they begin to lose the war, the Japanese take it out on the Korean people, but despite everything, small acts of defiance abound as the Koreans desperately hold on to their real identity. (MG)

This speculative fiction novel about an unwanted daughter, Ye Xian, who is thrown out of her home by her father when she is disrespectful to her stepmother.  Ye Xian is taken in by Grandma Wu, and soon becomes an expert at kung fu and part of the Secret Dragon Society that helps the oppressed.  China has been under Japanese occupation since 1937 and now, in 1942, they have a different kind of mission.  Ye Xian and the other members of the society must try to save 5 downed American fliers before the Japanese find them.  This part of the story is actually based in reality, as is the cruel way the Chinese people were treated by the Japanese occupiers.  Though fantasy, there's lots of Chinese culture and tradition to be learned about.  (MG)

6- No Surrender Soldier by Christine Kohler

The main character in this novel is a 15 year old Charmorro boy, Kiko, living in Guam in 1972 and an elderly Japanese soldier, Seto, who has been living in hiding since WWII and doesn't know the war is over.  This is an odd coming of age story for both Kiki and Seto, who was only a young man when he went into hiding from the Americans on Guam.  There is quite a bit of information about Charmorro customs and traditions, and is it very interesting to see how Seto lived in his underground cave, concealing his presence for so many years. (YA)

Until the vaccine was discovered, there were outbreaks of polio all the time.  During WWII, even the President suffered with it.  In September1944, with her father in Europe fighting, Ann Fay Honeycutt, 13, is also diagnosed with polio. The novel follows her treatment and her friendship with an African American girl she meets in the hospital.  Catawba County, NC was particularly hard hit by polio and Ann Fay's story nicely documents what was done about it.  Since there are so few cases of polio these days, it is interesting to read about how clothes and favorite toys were burned, swimming wasn't allowed, and how a makeshift hospital was constructed to handle all the cases there.  (MG)

8- Code Talkers: A Novel About the Navajo Marines of World War II by Joseph Bruchac

This is a historical fiction novel that tells about how the Navajo language and the Navajos who spoke it were used to send unbreakable coded messages during WWII and helped with the war.  But more than that, it is the story of what life was life for Native Americans within their family and when they were sent to an "Indian School" to be educated and where practicing their native culture and traditions could result in severe punishments.  This is the kind of novel that can make your blood boil when you read about how Native Americans were treated.   And even though they became real American heroes, it wasn't until 2000 that what they contributed to the war was acknowledged. (MG?YA)

9- Eyes of the Emperor by Graham Salisbury

This is one of the most disturbing books I've read.  Eddy Okubo, a Japanese American living in Hawaii, is only 16, but lies about his age and joins the army,  Seven weeks later, Pearl Harbor is attacked and from then on Eddy and the other Japanese American soldiers are treated like grunts.  When a Swiss emigre convinces President Roosevelt that he can train dogs to sniff out the Japanese, Eddy and 24 other soldiers of Japanese descent, are sent to Cat Island, MS where they serve as "hate bait" in the dogs training sessions.  This is, sadly, based in reality.  This is an interesting look at the kind of xenophobia that resulted after Pearl Harbor. (YA)

9a- Dash by Kirby Larson

When it was decided that Japanese Americans were to be put into internment camps for the duration of the war, they all lost everything they had worked for - homes, businesses, cars, cherished mementos from family in Japan.  For Mitsi, 11, it meant losing her best friends and her dog.  Later, at the internment camp, families are forced to live in dusty, smelly horse stalls, and later to dusty barracks in the middle of nowhere.   It's hard to believe now that this country could treat its citizens and its legal immigrants in such an appalling manner (well, actually, and I'm ashamed to say this, but maybe it isn't, after all). (MG)

This novel-in-free-verse is about a deaf girl, Paula Becker, who is 13 and living in Nazi Germany when the Nazis pass a law that allows them the euthanize disabled people, including children, to help create a master race that is free of any disability and also eliminate the cost of caring for them.  T4 is the name give to the program.  In desperation, Paula is taken to a safe haven where she learns sign language, but when the Nazis come to search the house, Paula must be taken to another safe haven.  T4 killings stopped in 1941 but Paula's life and other's with disabilities weren't safe until the end of the war. (MG)


It was interesting to go back and see what books I've read that I applied the keyword Diversity to.  One thing I noticed is that I have no reviews of LGTBQ books.  Any recommendations, besides Postcards from No Man's Land by Aidan Chambers?  I would appreciate any suggestions.